This Aggression Will Not Stand, Rand 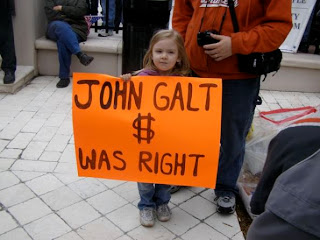 You faithful readers know about the complex relationship I have with the writings of Ayn Rand. She fascinates me because she had the capacity to do such amazing writing and she used it for the purposes of pure evil. Perhaps we should blame her muse, Satan, whose lies about the virtue of selfishness are the foundation of Objectivism, a pseudo philosophy that boiled down states: do whatever you want to do however you want to do it so long as you make money and if others don’t like it, it’s because they’re too weak to do the same and poor and stupid and they smell bad.

If there’s anything this country needs more than ever just now, it’s a film that reminds us that wealthy people are better and wiser than we are and we should be grateful that they hoard all the money. We’d just spend it wrong anyway where as they, great gods who hold us all upon their backs, will create industry and jobs (overseas, it’s true, but who are we to question the powerful). After  viewing the upcoming film version of Atlas Shrugged, I imagine the people of this country will unite and in a resounding voice cry: “The richest 10% only control 50% of the total income! This is an outrage! How can we do our part to make sure they control at least 80%? Sell them our government? No, we already did that. Perhaps we should lose our healthcare and our public services and our homes in record numbers.”

Me, I think Atlas Shrugged is the sad little fantasy of a deranged soul. I like to imagine a sad and bitter Ayn Rand sitting alone, imagining a place where everyone recognizes that she’s so much better than the rest of us and that if she wants a thing, it is made virtuous by her wanting it. Wouldn’t it be swell if John Galt and she and other rich people who think she’s cool had their own place away from the common rabble (you and me) so that we could destroy ourselves, which we surely would without wise Ayn Rand to guide us. The only thing to complete the fantasy is an alpha male with an angular face to smack her around now and again. And that, in a nutshell, is the story of Atlas Shrugged.

The movie version stars no one you’ve ever heard of and has the budget of a cable film. I expect it will fail big time as the richest ten percent just isn’t enough audience to create much of a box-office return. I have no intention of paying to see it, though I may “loot” it by watching it on cable someday. Don’t you pay to see it either, Esteemed Reader. Ayn Rand is on her way to joining Karl Marx in the dustbin of historical philosophies people thought were a good idea at the time, but in retrospect seem a bit short-sighted. If this movie does well, that inevitable trip will be delayed.

Still, I like to imagine rich people getting excited for the movie. After all, this is their Passion of the Christ. I like to imagine personal assistants camped out in front of a posh movie theater for weeks before hand to buy tickets to the midnight show. I like to imagine CEO’s and hedge fund owners arriving on the big night dressed in costume: “Who are you?” “I’m John Galt.” “Oh, how droll, because I asked—” “Yes, I know, and who are you?” “I am also John Galt.” “Splendid! Who are we, then!” Uproarious laughter. “Say, Alan Greenspan, old boy! I hardly recognized you in your Dagny Taggart costume!”

And now, won’t you join me in shaking your head and laughing at this ridiculous movie trailer (careful, it contains the “d-word”):