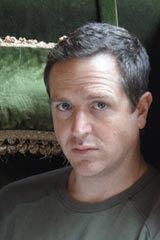 Hugh Howey spent eight years living on boats and working as a yacht captain for the rich and famous. His travels took him all over the islands of the Caribbean, up and down the East Coast, and through the Great Lakes. It wasn’t until the love of his life carried him away from these vagabond ways that he began to pursue literary adventures rather than literal ones. Whisked away to the mountains of North Carolina, he began a stint as the book editor for a popular review site and had reviews published in the New York Review of Science Fiction. Building on these experiences, Hugh wrote his first young-adult novel, MOLLY FYDE AND THE PARSONA RESCUE. The MOLLY FYDE series went on to win rave reviews and praise from readers. Hugh now lives in Jupiter, Florida, with his wife, Amber, and their dog, Bella. The dream is to return to the sea one day and complete the circumnavigation that has so far eluded him. Until then, he sticks with more literary adventures, and enjoys interacting with the readers he meets along the way.

Here's an article Hugh wrote about the benefits of self publishing.

And here's a hilarious response to Sue Grafton's recent comments about self-published authors.

Click here to read my review of Molly Fyde and the Parsona Rescue.

Click here to read my second interview with Hugh Howey.

ENDER'S GAME by Orson Scott Card
BATTLEFIELD EARTH by L. Ron Hubbard
and a new one: LEXICON by Max Barry

I spend 30 hours a week writing. And probably the same amount of time reading.

My first novel was picked up by a small publishing house. When I got the contract for the sequel, I thought long and hard and decided to self publish the book on my own. I've been self-publishing ever since. I have signed some contracts with major publishers when it made sense, however. WOOL is being published in over 30 territories. It's been a lot of fun working with editors and publishers to bring the story to more readers.

I believe writers are made through reading. Absorbing a lot of stories prepares you for telling your own. That's been true for me, anyway.

My favorite thing about writing is the revising and editing. My least favorite thing is staring at a blinking cursor when I don't know what happens next!

Stop comparing your rough draft to the finished products you read and enjoy. It's supposed to be rough. Leave it alone and keep writing to the end of your story, no matter what. Once you reach the end, you'll be able to go back and clean the work up. Push through!

Mark Twain. And I'm sure I'd have a hard time keeping my drink from exiting my nose.

Posted by middle grade ninja at 8:01 AM