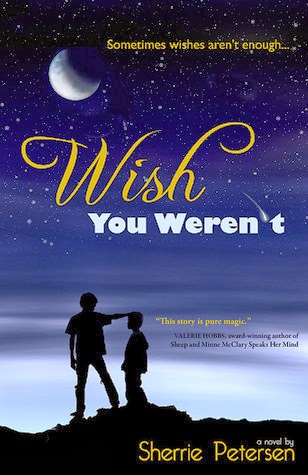 First Paragraph(s): IT’S MIDNIGHT AND I’M FLAT ON MY BACK on a patch of grass in front of our hotel room, hoping that no one looks outside and wonders what the weirdos from California are doing.
Tonight is the peak of the Perseids meteor shower. Every year my mom drags us out of bed just to see the shooting stars. My brother’s on one side of me, squirming around, trying to stay awake. My friend Paul’s on the other side, snoring. At least he already knew our family was crazy before he came on this vacation with us.
When I was younger, I thought it was cool to get up at midnight and watch the stars. Tonight I’d rather be in bed. Like Dad. I swear it’s still over a hundred degrees out here. And don’t get me started with the mosquitoes.

I have three siblings and I spent my weekend reunited with them and all the new members of the next generation. My poor nephew used to be the only baby in the family and we fawned over him. Then he had a little sister and a little brother and now two baby cousins and while we still fawn over him--of course we do, he's adorable--there's less fawning time to be allocated just to him. The pool of resources that was only his now has to be shared equally with others who have encroached on his territory. Countries go to war in this scenario, so is it any wonder there's such a thing as sibling rivalry? Having once been the only baby (long, long ago) before my little brother and sister arrived, I feel my nephew's pain.

This weekend was the perfect time to be reading Wish You Weren't by Sherrie Petersen, which is a book all about sibling rivalry. Middle grade readers are going to eat this story up. It's fun and charming and has all the feels. I knew I'd enjoy it as it comes highly recommended by old friends of ours:

“I love all the science details mixed with fantasy in Wish You Weren’t — just the kinds of flights-of-science-fancy I wish I had as child!”
SUSAN KAYE QUINN
bestselling author of The Mindjack Trilogy, Faery Swap and Third Daughter

“Fun and accessible, rich with realism and heart, this magical adventure reminds us of the things truly worth wishing for.”
CASEY McCORMICK
literary agent intern and blogger at Literary Rambles

I am quite pleased to see more and more books being blurbed by bloggers and fellow indie authors. Having recently had a blurb of my own grace a book, I know it's a thrill, and I love to see authors and bloggers supporting each other in this way. Blurbs no longer need to be handed down on a mountain top. Casey McCormick is a blogger I've long known and trusted and her blurb carries more weight with me than the blurb of a formally posh literary magazine. And regular Esteemed Readers know I hang on Susan Kaye Quinn's every word:) Both these folks have been critique partners of mine.

Meet eleven-almost-twelve-year-old Marten and note how Petersen tells most everything we need to know going in during a discussion seemingly about wishing on stars:

I roll my eyes. Mom always has her head up in the clouds, dreaming impossible dreams. I’m not really sure how she ever became a respected scientist. The guys in her lab would die laughing if they heard her talking about wishing on stars.
My dreams are much more down to earth. Get through middle school without ever experiencing swirlies. Install an alarm system on my bedroom to keep my brother out. Change my parents’ minds about moving to Texas.
I stifle a yawn and wonder how much longer we’re going to stay out of bed. When the sun comes up, it’ll be our last day of vacation here in Corpus Christi. If you can call visiting cousins and looking at model homes a vacation.

Sometimes I think the reason my parents waited so long to have another kid is so that they would have a built-in babysitter.

Marten doesn't believe in wishing upon stars despite the charming Disney song. His dad embarrasses him, his mom placates him, and his little brother annoys him. He's in a tough spot we older siblings know all to well. Some people like to think of childhood as the finest time of life, and certainly it has its charms, but at a cost. Children have very little say in their day-to-day lives and that's poor Marten. He doesn't want to move. He doesn't want to be a babysitter, but he has very little choice in the matter. It's this powerlessness that makes Marten the perfect candidate to have a wish come true and to at long last have a say.

Even though the whole wishing on a star thing has never worked before, I’m willing to give it one more try. I take a deep breath, squeeze my eyes tight and make my wish. Sweat drips into my ear as a mosquito buzzes around my head, then . . .
Silence.
I relax my tensed muscles and listen for any telltale sounds. I open one eye and look around.
Aldrin is staring up at me, his brown curls bouncing around his face. “What’cha doing, Marten?”
I sigh. So much for that.
Aldrin jabs me in the ribs, reminding me that I’ve failed. Again.
I jog back toward the room, biting my tongue to keep the words inside.
I’m wishing you weren’t here.

To be fair, prior to this wish Aldrin has been extra obnoxious. He's broken Marten's 1978 Han Solo action figure complete with The Rebel Alliance Medal of Honor. Noooooooooo!!!! I'm with Marten on this one. That kid's gotta go:) By the way, multiple references to Star Wars in a book about wishing on stars is the right call.

Marten doesn't give his wish much thought as everyone knows wishing on stars, while fun, is a mostly meaningless activity beyond articulating your goals and centering your focus on achieving them (always a good idea). Marten almost forgets his wish until the next day when this happens:

I rub my eyes, sure I’m just seeing things. But he’s still fading. In slow motion. I reach out to grab him, but my hands pass through his body. I glance around for help, but Paul looks like he’s frozen at the trashcan and no one else is near. Even the lady in the cowboy hat has wandered off.
Panic twists my stomach into knots as I turn back toward my brother. Aldrin reaches for my hand, his mouth seems to silently scream my name.
“Can you hear me?” I try to hold him, watch my hand pass through his rapidly disappearing body, squeeze the air that used to hold his form.
And then he’s gone.

Now that's a situation! Marten's parents are quite concerned to learn their son has disappeared Marty McFly-singing-Earth-Angel style. Will Aldrin return in time for a rousing rendition of Johnny B. Goode!?! It's all good and well to wish your siblings would disappear, but the actual experience of it would be terrifying, I think.

And speaking of movies, in addition to being a Star Wars and Back to the Future fan, I'm positive Sherrie Petersen's looking forward to that new X-men movie the internets are currently buzzing about. Whilst in a history museum, Marten and his buddy Paul find themselves suddenly the only people moving. Everyone else is frozen, then they move backwards in time, then they move about unable to see our heroes, and then one particularly interesting child from the past can see them, and then they travel through limbo:

“Limbo? Seriously?” I focus back on Aldrin. He doesn’t seem to be tiring of this constant motion. Not that the little guy tires out easily. “Isn’t Limbo like for Catholics and people who play Dungeons & Dragons?”

Wish You Weren't reminded me quite a bit of the classic A Wrinkle in Time. Our heroes are on a mission through space and time to save a loved one and are guided by a strange adult who seems to know the terrain, but is peculiar and not entirely trustworthy.

This weekend, as I read this book, I thought of the many times I wished my siblings had disappeared. None of them ever broke an original 1978 Han Solo doll, so I suppose they can be tolerated. All I can say to the Martens of the world is it does get better. There may come a day, many, many days from where you currently are, that you may be grateful for your brothers and sisters. They're the people who've known you longest and in some ways best and they preserve your past as you preserve theirs.

So is Aldrin returned to existence? Esteemed Reader, you'll have to read the book to find out and you should. Wish You Weren't is a fun tale with a story geared toward younger readers, but which will be enjoyed by older readers as there are plenty of tidbits aimed at adults. There's a pleasant twist at the end and you might just get a little emotional before it's all done.

As always, I'll leave you with some of my favorite passages from Wish You Weren't:

My brother’s face lights up. That look makes me nervous. His innocent face always fools people, but not me. I know he’s a devil in cute kid clothing.

The problem is, my mother actually has no concept of time. Whenever we go to someone’s house and she says, “Okay, Marten. Stop playing that video game. It’s time to go,” what she really means is, “Stop what you’re doing and stand here and be bored while I keep on talking to my friend.”

Everything is deadly quiet. It’s like I’ve stumbled into the back room of a creepy department store and all the mannequins have surrounded me.


Every muscle in my body tenses. Paul squeezes his eyes shut, like that’s going to make us invisible again.

Posted by middle grade ninja at 10:04 AM