Middle Grade Ninja is available on Soundcloud, Stitcher, itunes, Podbean, Podblaster, RadioPublic, blubrry, Listen Notes, Google Play, and many other fine locations.
Jim McCarthy and I discuss how he became a literary agent and his career in publishing so far. We chat about COVID-19 and its impact on the industry, the excitement he felt when his first client’s book took off, how he falls in love with a submission, the sorts of projects he’s interested in, how he woos a potential client, what a writer can expect when they sign with Dystel, Goderich and Bourret LLC, a haunted apartment, finding an agent that’s worthy of you, and so much more.
Click here to read Jim McCarthy's original 7-Question interview. 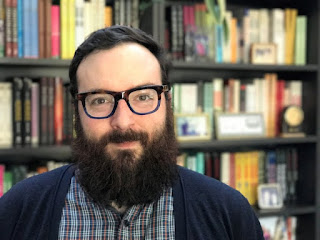 Jim McCarthy interned for Dystel, Goderich and Bourret while studying urban design at New York University. Upon graduating, Jim realized he would much rather continue working with books than make the jump (as he had originally intended) to the field of city planning. Eighteen years later, he remains at DGandB as a VP and agent. As an avid fiction reader, his interests encompass both literary and commercial works in the adult, young adult, and middle grade categories. He is particularly interested in literary fiction, underrepresented voices, fantasy, mysteries, romance, anything unusual or unexpected, and any book that makes him cry or laugh out loud. In addition to fiction he is also interested in narrative nonfiction whether it be memoir, historical, science, pop culture, or just a darn good polemic.

Dystel.com
Posted by middle grade ninja at 6:21 AM