Gayle Forman and I discuss her career from a journalist for SEVENTEEN to a celebrated YA novelist and the launch of her first MG book, FRANKIE AND BUG. She describes the experience of having IF I STAY adapted into a film and tells an excellent ghost story. We chat about WE ARE INEVITABLE, writing to get out of poverty, how there is no promised land for writers, playlists created for her novels, her writing process, life during the pandemic, dealing with anxiety, and more. Oh, and she mentions living within a five-block radius of authors Libba Bray, R.J. Palacio, E. Lockhart, and Jacqueline Woodson.

Award-winning author and journalist Gayle Forman has written several bestselling novels for young adults, including the Just One Series, I Was Here, Where She Went and the #1 New York Times bestseller If I Stay, which has been translated into more than 40 languages and in 2014 was adapted into a major motion picture. Gayle published Leave Me, her first novel starring adults, in 2016 and her latest novel I Have Lost My Way was released in March of 2018. Gayle’s essays and nonfiction work has appeared in publications like The New York Times, Elle, The Nation and Time. She lives in Brooklyn, New York, with her husband and daughters. 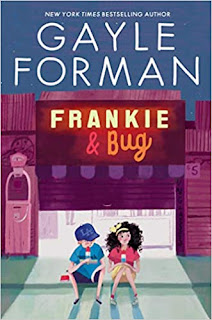 It’s summer, and all ten-year-old Bug wants to do is go to the beach with her older brother and hang out with the locals—just like they have for the last two years. But now Danny wants his space, and Bug is stuck hanging out with their neighbor Phillip’s nephew Frankie, who has come for a visit. After a bumpy start, Frankie and Bug join forces to find the Midnight Marauder—a criminal on the loose in the L.A. area. It makes for a fun summer until but violence strikes close to home after Uncle Phillip is attacked. As Frankie and Bug turn their attention to solving this mystery, what they learn about themselves is far more important—family can be whatever you make it, love is stronger than blood, and it’s up to all of us to hurry toward justice.

Posted by middle grade ninja at 10:17 AM

Email ThisBlogThis!Share to TwitterShare to FacebookShare to Pinterest
Labels: Frankie & Bug, Gayle Forman, I Have Lost My Way, I Was Here, If I Stay, Interview, Just One, Middle Grade, Podcast, The End of My Heart, We Are Inevitable, Where She Went