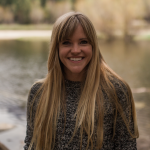 Erin Young joined DG and B in 2014 as the assistant to Michael Bourret at the West Coast office in Los Angeles. Previously, she worked as an editor at two prestigious literary magazines. Erin holds an M.F.A. in Creative Writing and dabbles in writing. Her most recent work was on the libretto of the critically acclaimed opera, “Hopscotch,” which played throughout Los Angeles.

Before entering the publishing business, Erin worked as a zoologist, which gave her a great love for all animal-related literature. She is also interested in all forms of young adult and middle grade fiction, particularly fantasy, action adventure, and magical realism. In adult fiction, she likes weird literature (think Haruki Murakami or Kurt Vonnegut) as well as all kinds of mysteries and commercial thrillers. In nonfiction, she enjoys memoirs and biographies, sport and science narratives, and just about anything unusual.

The Good Earth by Pearl S. Buck.
The Secret History by Donna Tartt.
His Dark Materials by Phillip Pullman (but since that’s three novels, I would say The Amber Spyglass is my favorite.)

“Game of Thrones”
“This Is Us” (Amazing writing!)
“Stranger Things”

Movies:
I love anything Pixar. My dream is to find a book that will be made into one of their films.

My ideal client is someone who’s not afraid to take a critique. I love to get into some deep editing before I submit, and sometimes it can mean big changes. I also love someone who’s patient. The publishing industry is very slow, and patience is key!

I enjoy fantasy of any age group that’s new and original. I want to see new worlds I’ve never explored, with different rules and new creatures. I never get tired of magic and wonder. Something specific I want to see is a fantastical mystery. I think it’d be so much fun to use a mystery as a way to explore the endless limitations of an enchanted world.

I love editing. I’m a real editor at heart, which means I give plenty of feedback.

My least favorite thing is dealing with rejection because there is unfortunately a lot of it, and I have so many projects that I love like children.

Never, ever, ever, give up on a story you love. Even if you have to revise it so many times that it resembles nothing of the way it started. Also, don’t be afraid to make drastic changes. I’ve seen wonderful stories emerge from the ashes of a previous one. Be brave!

dystel.com
Posted by middle grade ninja at 9:33 AM