Nancy Richardson Fischer and I discuss her fascinating career from her first job writing for Barnum and Bailey Circus to her time with Lucas Film, during which she wrote a trilogy in the STAR WARS: JUNIOR JEDI KNIGHTS series. We chat about surviving in the Amazon like the characters in her new young adult novel, THE SPEED OF FALLING OBJECTS. We also talk kite surfing, zombies, Stephen King, my fear of bees, self publishing, strategies for working with an editor, and so much more. 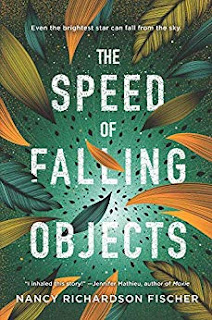 From the author of When Elephants Fly comes an exceptional new novel about falling down, risking everything and embracing what makes us unique. Don’t miss this compulsively readable novel about the most unlikely of heroes.

Danger “Danny” Danielle Warren is no stranger to falling. After losing an eye in a childhood accident, she had to relearn her perception of movement and space. Now Danny keeps her head down, studies hard, and works to fulfill everyone else’s needs. She's certain that her mom’s bitterness and her TV star father’s absence are her fault. If only she were more—more athletic, charismatic, attractive—life would be perfect.

When her dad calls with an offer to join him to film the next episode of his popular survivalist show, Danny jumps at the chance to prove she’s not the disappointment he left behind. Being on set with the hottest teen movie idol of the moment, Gus Price, should be the cherry on top. But when their small plane crashes in the Amazon, and a terrible secret is revealed, Danny must face the truth about the parent she worships and falling for Gus, and find her own inner strength and worth to light the way home.

NancyRichardsonFischer.com
Posted by middle grade ninja at 8:22 AM