Esabella Strickland is an award-winning actress, screenwriter, filmmaker, and social media influencer who’s just published her first novel, THEN AND THERE, HERE AND WHERE. And she’s 15 years old. We discuss her time as a Variety BC Youth Ambassador speaking about her anxiety, ADHD, and dyslexia, as well as her jeans pocket art. She explains how she charges toward her fears, strives to lift as she rises, and writes about young adult characters as a young adult. 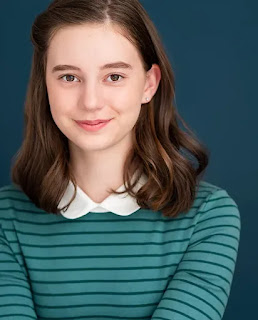 Described as a "Renaissance Girl" for her multitude of talent. 15-year-old Esabella Anna Karena Strickland is a Multi Award-Winning Filmmaker, Award-Winning Writer, Award-Winning Actress, Award-Winning Media Host, Artist, and GenZ Influencer based out of Vancouver, BC. She is a young, raw talent who is a learning disability advocate and empowering figure against bullying through the arts.​Esabella starred in local indie short film's Enlightenment, Things You Take, and Arthurs Gift. She also co-wrote, co-directed and starred in the Short Film My Red Ball and The Notebook through the Young Movie Makers Program. My Red Ball handles themes of bullying, written through Esabella's own life experience, it has gone to appear in 60 International Film Festivals, winning at 10 of them.
Esabella has also made appearances on local productions of Travelers, Goodboys, and Series of Unfortunate Events. Esabella is also the youngest member and supporter of Women In TV and FIlm Vancouver.Esabella is also an Award-Winning Filmmaker and Writer for her feature film screen adaptation of her Novel Then and There, Here and Where which has won at several film festivals for Best Script. She was also behind the camera for A Conversation with E which was made through the CineLab Filmmaking Camp this summer. A Conversation with E is already an official selection of the 2021 Cannes Short Film Festival and has won at several film festivals. This lead to her writing and producing her first Independent film called A Dialogue with Pandora this fall with the support of Actor Paul Greene.Esabella recently joined Graisland Entertainment as a GenZ Script Consultant and is collaborating with Producer and Screenwriter Michael Grais on the next generation of Horror Films.Esabella had the honour of co-hosting the 53rd and 54th annual Variety Show of Hearts Telethon as their Youth Ambassador and was recently invited back to host the 55th Telethon in 2021. Esabella was also an EveRiathing red carpet host to support the 2019 Joey awards. Esabella was the ambassador and host for Geektopia 2019 to help raise money for the Amanda Todd Legacy. Esabella is also the ambassador and virtual host for the 2020 Meowfest to help raise money for the Langley Animal Protection Society, and Regional Animal Protection Society.Esabella was invited to the 2019 Adobe Summit as an Adobe insider and speaker. She was the young influencer to attend the Las Vegas event and was in the top 10 in Social Media Engagement during the week of the Summit. Many were impressed by her empathy, compassion and insight of a Genz'rEsabella has finished co-writing her first Young Adult Novel. Then and There, Here and Where, which will be published March 2nd, 2021. The main character of the book; Orabella has a learning disability while learning to become a heroine. Esabella's goal is to have girls feel connected and empowered by Orabella. As an artist, she is a painter, drawer and a jean pocket painter for celebrities and special orders of which 10% of sales go towards local charities​Esabella has worked hard to train herself with techniques she uses to deal with both her anxiety, Adhd, and dyslexia, Through this process she's discovered what she calls her two superpowers, memorizing and a higher level of sensitivity towards others, including the characters she plays, She has also trained herself with mindfulness and grounding techniques to cope with her anxiety - something she hopes to pass onto those who she works with. 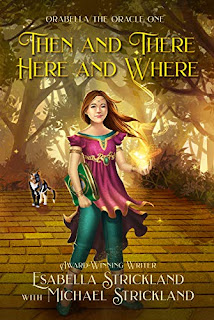 Fresh out of middle school, 12-year-old Orabella thought the worst of her worries would be choosing between going to high school and being homeschooled—between sticking with her friends or being free from the bullying she receives because of her learning disability. But she soon discovers that the world she knew, school included, isn't what it seems.An eerie encounter with a mysterious raven during the Summer Solstice Festival—and the sudden disappearance of her parents soon after—forces her to move in with her grandparents, where strange occurrences happen more and more often. When Oreballa stumbles upon a family secret with roots in Ancient Egypt, she's thrust into a world of ancient spirits, time-traveling, and, most importantly, the Tree of Life, a spiritual entity that maintains the stability of the entire universe.Newly aware of her true destiny, Orabella must learn to shed her self-doubt and insecurities surrounding her learning disability and adjust to her new role as a protector of humanity and the Tree of Life against the mischievous spirit, Iblis, and his forces of darkness in order to keep the universe in balance and find her parents.
OrabellaTheOracle.com
EsabellaKarena.com
Posted by middle grade ninja at 9:08 AM