Rob Harrell and I discuss how the launch of his newest novel, WINK, has been impacted by the quarantine for COVID-19 along with most other aspects of writing life. He shares how he met his literary agent and how they work together on his novels. We talk about his becoming a professional cartoonist with multiple syndicated strips, the upcoming movie RUMBLE based on his novel MONSTER ON THE HILL, the qualities of Hoosier men named Rob, and so much more. 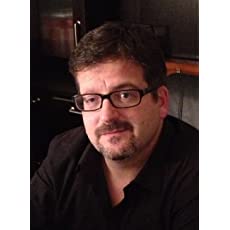 Harrell wrote and illustrated the graphic novel Monster on the Hill, published by Top Shelf. The story of a town with a down-on-his-luck monster, Monster was the inspiration for the animated movie Rumble (2021) from Paramount Pictures.

Next, Harrell wrote the Life of Zarf trilogy of hybrid novels. Published by Dial Books for Young Readers, they tell the story of Zarf Belford, a troll attending middle school in a fairy tale world.

Harrell’s next book is Wink, the funny but heartfelt story of Ross Maloy, a seventh-grader dealing with a horrible diagnosis and cancer treatments – all while trying to just blend in and survive middle school.

As an illustrator, Harrell has worked with clients including Mad, Simon and Schuster, American Greetings, Time, Inc. and Volkswagen. His figurative paintings have been shown in solo shows in San Francisco, Austin and Indianapolis.

Rob lives in Zionsville, Indiana with his wife Amber and their two dogs, Cooper and Kasey. 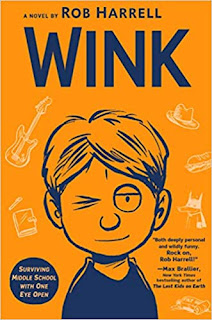 Ross Maloy just wants to be a normal seventh grader. He doesn't want to lose his hair, or wear a weird hat, or deal with the disappearing friends who don't know what to say to "the cancer kid." But with his recent diagnosis of a rare eye cancer, blending in is off the table.

Based on Rob Harrell's real life experience, and packed with comic panels and spot art, this incredibly personal and poignant novel is an unforgettable, heartbreaking, hilarious, and uplifting story of survival and finding the music, magic, and laughter in life's weirdness.

Posted by middle grade ninja at 9:40 AM