Middle Grade Ninja is available on Soundcloud, Stitcher, itunes, Podbean, Podblaster, RadioPublic, blubrry, Listen Notes, Google Play, and many other fine locations.
Carole Boston Weatherford and I discuss poetry, history, and race in her newest picture books BOX: HENRY BROWN MAILS HIMSELF TO FREEDOM and UNSPEAKABLE: THE TULSA RACE MASSACRE. We talk about discussing difficult history for children, how to tailor-make books for Critical Reading elementary school students, what it means to be called to poetry by The Creator, calling out Jinx the Pokémon, a spirit story, race memory, writing with agency, and so much more. 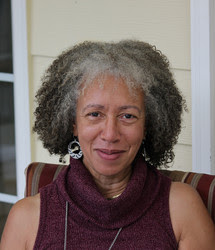 Carole Boston Weatherford grew up in an all-black neighborhood in Baltimore, Maryland. An only child until the age of 10, she has fond memories of riding bikes, drawing and writing, and singing and tap dancing to her dad's collection of jazz records. In the first grade, Carole recited her first poem. Throughout elementary and middle school, her artistic and literary talents were recognized and encouraged by her teachers. Carole continued writing through high school and into college, but it was only when one of her poems was published in a city magazine that she seriously considered becoming an author.

For 20 years, Carole Boston Weatherford worked for the National Bar Association in Washington, DC and North Carolina. After becoming a mother, she enrolled in a master's level creative writing program at the University of North Carolina in Greensboro. Although she entered the program writing poetry for adults, she graduated wanting to write historical fiction and poetry for children. Weatherford's first children's book, Juneteenth Jamboree, was published in 1995. Since then she has authored more than two dozen children's books.

Weatherford says that persistence is one of the keys to her success. "I had manuscripts that had been rejected 20 times before finding a home with a publisher," she recalls. "But I keep going and I believe in what I write about." Weatherford creates the kind of books that weren't available to her as a child: ones that feature African-American protagonists. In the late 1990s Weatherford began teaching college courses in composition, creative writing, and children's and adolescent literature.

Today Carole Boston Weatherford is an associate professor at Fayetteville State University. She and her husband live in High Point, North Carolina. 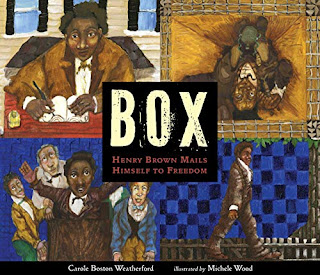 In a moving, lyrical tale about the cost and fragility of freedom, a New York Times best-selling author and an acclaimed artist follow the life of a man who courageously shipped himself out of slavery.What have I to fear?My master broke every promise to me.I lost my beloved wife and our dear children.All, sold South. Neither my time nor my body is mine.The breath of life is all I have to lose.And bondage is suffocating me.Henry Brown wrote that, long before he came to be known as Box, he “entered the world a slave.” He was put to work as a child and passed down from one generation to the next — as property. When he was an adult, his wife and children were sold away from him out of spite. Henry Brown watched as his family left bound in chains, headed to the deeper South. What more could be taken from him? But then hope — and help — came in the form of the Underground Railroad. Escape!In stanzas of six lines each, each line representing one side of a box, celebrated poet Carole Boston Weatherford powerfully narrates Henry Brown’s story of how he came to send himself in a box from slavery to freedom. Strikingly illustrated in rich hues and patterns by artist Michele Wood, Box is augmented with historical records and an introductory excerpt from Henry’s own writing as well as a time line, notes from the author, and a bibliography.
CBWeatherford.com
Posted by middle grade ninja at 9:20 AM