Anne Nesbit tells the tale of how she met and secured her editor under bizarre, high-stakes circumstances. She shares some excellent insight about writing historical fiction for children, including her newest middle grade novel, DARING DARLEEN, QUEEN OF THE SCREEN. She also discusses her writing habits both before and during quarantine for COVID-19, her passion for silent film and cinema history, her concern about evil goblins, her fear that plotting is an illusion, and much, much more. 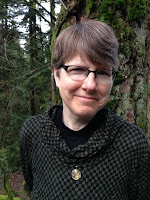 Anne Nesbet writes books for kids and watches a lot of silent films. She lives near San Francisco with her husband, several daughters, and one irrepressible dog. She is an associate professor at the University of California, Berkeley. 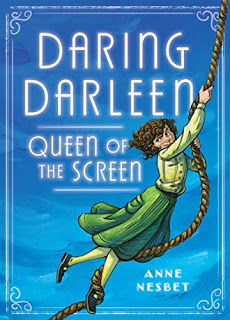 When a publicity stunt goes terribly wrong, twelve-year-old Darleen Darling, star of the silent film era, must defeat villains both on screen and off in this edge-of-your-seat adventure.

It’s 1914, and Darleen Darling’s film adventures collide with reality when a fake kidnapping set up by her studio becomes all too real. Suddenly Darleen finds herself in the hands of dastardly criminals who have just nabbed Miss Victorine Berryman, the poor-little-rich-girl heiress of one of America’s largest fortunes. Soon real life starts to seem like a bona fide adventure serial, complete with dramatic escapes, murderous plots, and a runaway air balloon. Will Darleen and Victorine be able to engineer their own happily-ever-after, or will the villains be victorious?

Posted by middle grade ninja at 7:32 AM