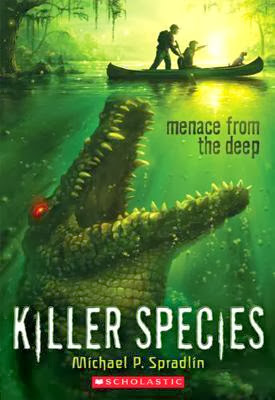 Quick Plug: I've written a guest post over at Pearls Cast Before a McPig. Comment to win a copy of my book:)

First Paragraph: The boat slid silently across the surface of the water. At the stern the man turned the tiller to the left on the nearly silent electric motor. The craft responded instantly and he pointed the bow toward a bank of mangrove trees rising up out of the swamp. After thirty yards, he switched the motor off and the boat floated to a stop, the trees another twenty yards away. He flipped on his infrared night-vision goggles and studied the trees for heat signatures. Scanning from the far left of the tree line, he saw nothing. Then, there it was, a slight movement in the branches of a tree to his right.

Oh, Esteemed Reader, I've got a proper treat for you today. Killer Species is exactly the sort of series I would've wanted to read as a boy and adult me has had my eye on it for a while. If a cover wants to grab my attention, it needs to have a monster on it (or a zombie or a superhero). Menace from the Deep has a giant alligator on its front. It had me at "hello."

Still, young me would've been skeptical. Is this book really populated by giant alligators, or is the cover a teaser image? If Spradlin had opened with 50 pages of exposition establishing his protagonist and all that good stuff, then introduced the monster, I wouldn't know about it because I would've already put the book down in favor of Super Mario. Fortunately, he opens his monster book in the finest way a monster book can open; with violence (naturally):

The python moved its head back and forth, slithering down the tree trunk. But it was too late. The Pterogators leapt from their perches in the nearby trees. As they jumped they spread all four legs and a flap of skin opened, connected to their bodies, just above their knee joints. It allowed them to glide from branch to branch, much like their reptilian ancestors, the archosaurs, navigated the canopy of the Cretaceous forest millions of years ago.
They fell upon the snake, their rakish claws carving into the python. The snake turned and struck the closest beast, trying desperately to sink its fangs into the hard, scaly skin. It had no effect. The python struck again and again but could not find purchase on the creatures about to destroy it.
The first bites from the genetically superior creatures were devastating. They bit down with a force equivalent to a one-thousand-pound sledgehammer crushing a watermelon, killing the snake instantly. Though it was already dead, the nerves and muscles throughout its body continued to twitch. The gators continued their work, and in less than two minutes the snake was a mass of twisted scales and flesh.

No people are harmed, of course, as this is a book targeted at children. But I can't promise no one gets hurt later as that would be a spoiler. And besides, alligator monsters so giant and so awesome don't need to hurt people right off to be interesting. Watching them tear apart a python will sate young boy's appetite for blood for a time--though eventually the pterogators will have to attack some people--and they do, they do:)

And if we're going to be worried about these pterogators attacking people, we're going to need to care about those people. Once Spradlin introduces the stars of the book, he introduces our protagonist in as succinct a fashion as I've ever seen:

“Sorry,” Emmet’s dad said. “Probably should have gotten the shocks replaced before we left Montana.”
“Probably,” Emmet muttered, looking out the window. He was twelve and moving for the fourth time in six years. His dad was most recently posted to Montana for just over a year, not long after Emmet’s mom died. Emmet liked Montana.

What I like about this paragraph is the way it downplays the most important piece of information. Emmet moving around a lot is important and I'm sure it will play a factor as the series goes on. His age is good to know. But by casually tossing the death of Emmet's mother amongst a discussion of Emmet's love of Montana, Spradlin is mirroring Emmet's desire to push that event to the side of his mind. Emmet doesn't want to deal with her death. Nor does the story. It wants to be a tale of monsters, and it is, but you can bet Mom's death will come up again before the book is done.

This is a master stroke. Of course the reader empathizes with a boy who's lost his mother. More, Emmet and his father have their own issues before the monster shows up. They're not monster bait waiting for the terrible thing to come knocking on their door. They're fully formed characters with their own concerns. Two men dealing with the passing of Emmet's mom and rebuilding their family would be an interesting book all on it's own. That way when the monsters do come, bashing down doors with their great tails, we care that they're not chasing monster bait, they're chasing Emmet!

But these aren't just alligators. Oh no, my friend. These are genetically altered monsters:

It’s fascinating, really. Someone with a tremendous knowledge of molecular and cellular biology has created a hybrid species. In this case, they’ve recombined the DNA of an alligator and a bird of prey. The result is a creature similar to some types of archosaurs that existed millions of years ago,” Dr. Doyle said.

Emmet hooks up with Calvin, a Florida native who's not the least bit concerned with alligators, or even pterogators, and Calvin's mom (her husband is also conveniently dead) makes eyes at Emmet's Dad. There's a mad scientist (naturally), and the book is soon overrun with monster attacks. I loved it. I had a great time, I feel like I got my money's worth, and I'll be reading Killer Species #2.

No review would be complete without mentioning Emmet's dog, Apollo. I was worried he might get chomped from his introduction (and he might--I'm not saying either way). Authors who include cute dogs in their stories are absolutely pandering to readers, and it totally works:) I've viewed Air Bud and looking forward to Super Buds. I know I'm silly, but I'm reading Killer Species to be entertained. There's no monster story a cute doggie can't make better:

When he opened the door, Apollo catapulted out of the truck. He climbed out slowly, his muscles stiff and achy. The little mutt went right to a bush by the front door, sniffed at it, declared it suitable, and then did what dogs do. The two of them stretched and tried to stifle yawns.

There's plenty of science in Menace From the Deep, but it's mostly outlandish. To compensate, Spradlin pays extra attention to the details of real science--which is very Michael Crichton of him. In alternating chapters, we're treated to the villain's perspective, though he remains anonymous for a time. These chapters reminded me a bit of the Voldemort chapters in Harry Potter and they build suspense nicely because we know how formidable Emmet's enemy is before he does. Also, we get to learn just how much work goes into being a super villain:

FROM A COMPOUND HIDDEN NEAR THE NORTHERN EDGE of the Everglades, a man sat at a bank of computer screens and monitors. The building was prefabricated and set deep into the swampy soil. Construction crews he flew in illegally from South America brought the structure here in pieces. Once it was assembled he sent them back home. And from his secret hideaway, his work began in earnest. It was from here he set out to stop the destruction of the Everglades.
No one would ever find this place. The building was dark concrete and the outside walls and roof were covered with native vegetation. The roof was too thick for heat to escape, and the power came from a place no one would ever suspect, more than a mile away. He used specially designed waterproof cables to carry the electricity beneath the swamp to his compound. Even if someone were to uncover the deeply buried cables, it would still be a Herculean task to trace them this far. At night, two wind turbines emerged from specially built shafts at the rear of the building and wind energy generated power to backup batteries that could keep the compound running for nearly three days, should the generators go down. Long enough for him to fix the problem or evacuate to a backup location much like this one but in a place just as hard to find.

And that's going to do it. Buy yourself a copy of Menace From the Deep and be prepared to buy the entire Killer Species series. They're good time books of the sort I wish we had more. I hope Spradlin keeps his monsters coming.

As always, I'll leave you with some of my favorite passages from Killer Species #1: Menace From the Deep:

Calvin just shrugged again, and Emmet thought he was pretty low-key for someone who spent his whole life surrounded by alligators.

Emmet sat in the boat. Apollo was poised, trembling, on the edge of his seat, his nose working the air. He was desperate to jump out and follow Calvin, and give the island a good smelling-over.

“And you’re sure it was taken? It didn’t just come loose?” Dr. Geaux asked.
Calvin looked at his mother and blinked a few times before answering. Emmet wondered if this was the Calvin equivalent of a tantrum.
“Yes, Mom. Somebody took it. It would need to ‘come loose’ on both ends. And besides, whoever did it also took the radio mic to make sure we couldn’t call for help.” Calvin looked down at the floor then, as if to say that this part of the conversation was over.