7 Questions For: Author Rhys A. Jones 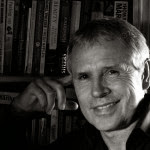 Rhys A Jones was born in 1955 and grew up in a mining village in South Wales with his nose in a book and his head in the clouds. He managed to subdue his imagination long enough to carve out a career in medicine, writing whenever the chance arose.

In 1994, writing as Dylan Jones, he published his first scary book for adults, a thriller, which was subsequently made into a two-part film by the BBC. Other scary books followed.

A growing desire to move away from adult thrillers and write for children is what currently preoccupies him. The Obsidian Pebble is the first in a quintet featuring eleven-year-old Oz Chambers whose family inherits a ‘haunted’ house. His mother wants to leave, but Oz wants to unlock the house’s mysteries and uncovers a secret that will change his life forever.

Rhys A Jones has three grownup children who have emerged remarkably unscathed into adulthood. When not writing, he practices medicine and lives in darkest West Wales with his understanding (very) wife and two dogs.

Oh, and the Rhys is pronounced Reece–as in Rhys Ifans of Harry Potter (Mr Lovegood) and The Amazing Spider-man (Lizard) fame. Or perhaps it’s easier if you just think of Reece Witheespoon, though she is a lady.

Click here to read my review of The Obsidian Pebble.

And now Rhys A. Jones faces the 7 Questions:


1/ The Man With Absolute Motion, by SilasWaters. A SF adventure which had a huge influence on the teen me.
2/ Moon of the Red Ponies, James Lee Burke. Brilliant
3/ Something Wicked This Way Comes. Ray Bradbury. Amazing, dark, poetic.

I started writing when I finally passed all the exams I needed to practice as a surgeon. It was a huge release. I wrote what I was reading at the time and published 4 adult, psychological thrillers as Dylan Jones. 2 were made into films by the BBC.

Then we had 3 kids. The genre and my life did not chime. I wrote some stories for the kids and found out that I could remember what it was like to be 11. I wrote the Obsidian Pebble and self published. People seemed to like it. Now Spencer Hill Press have it. I'm not arguing.

I think you have to have a certain type of mind to write. I suspect that had to do with genes. The curse of the imagination. That's not enough. Because the technique has to be taught/ learned.  But the one is no use without the other.  There, a diplomatic answer.

Write for yourself. What you would want to read. Forget zeitgeist and trends.  Be true to yourself.


Question One: If you could have lunch with any writer, living or dead, who would it be? Why?
Neil Gaiman. Seems like a nice bloke.

www.rajonesauthor.com
Posted by middle grade ninja at 11:16 AM