My friend Sarah J. Schmitt and I discuss her path to publishing IT’S A WONDERFUL DEATH her newest novel, WHERE THERE’S A WHISK, and why you should never give anyone else power over your art. She shares how she found her editor on Twitter, how she secured her literary agent, and how she survived the collapse of her publisher. We also chat about author income fluctuations due to the pandemic, discussing hybrid publishing with your literary agent, writing fast first drafts, being active in the local writing community, telling a story from outside your own perspective, WATERSHIP DOWN, visions of the afterlife, and so much more. 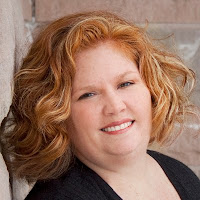 Sarah J. Schmitt is a K-8 school librarian and Youth Service Professional for Teens at a public library who, in addition to planning a variety of events, enjoys opening up the world of books to reluctant readers. She runs a teen writing program that combines Skype visits from well-known authors and screenwriters and critique group style feedback.

Prior to immersing herself in the world of the written word, Sarah earned her Masters of Science in Higher Education Administration and Student Affairs from Indiana University where she worked with first year college students as they acclimated to college life. Sarah lives outside of Indianapolis with her husband, two kidlets and a cat who might actually be a secret agent. She is an active member of SCBWI, ALA and the Indiana Library Federation and is a regular participant at the Midwest Writer's Workshop. 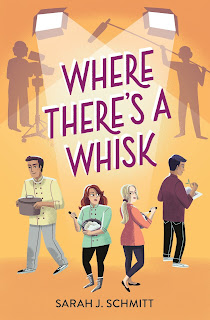 Peyton Sinclaire wants nothing more than to escape her life as a diner waitress in her small, North Florida town and attend culinary school. Top Teen Chef, Food TV's new show that pairs reality TV drama with a fast-paced culinary competition, is her ticket out of her boring future. It's a once-in-a-lifetime chance to make her dreams come true and Peyton is determined to prove to herself, and the world, that where you're born does not determine where you can go. However, once on the show, Peyton quickly discovers that there is more to the competition than just a well-seasoned dish.

As things start to heat up on and off the set, Peyton will have to prove to the judges that she deserves to win while trying to untangle what is real and what is scripted drama, and decide what she is willing to risk to win before her dreams end up on the chopping block.

Posted by middle grade ninja at 9:16 AM