Book Review: MADE YOU UP by Francesca Zappia 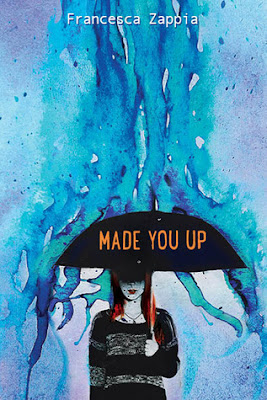 WARNING: This week’s book is actually edgy YA and it is filled with adult content. It is absolutely not appropriate for younger readers and adults should view it as the equivalent of an ‘R’ rated movie.

First Paragraph(s): If I was good at the grocery store, I got a Yoo-hoo. If I was really good, I got to see the lobsters.
Today, I was really good.
My mother left me at the lobster tank in the middle of the main aisle while she went to get Dad’s pork chops from the deli counter. Lobsters fascinated me. Everything from their name to their claws to their magnificent red had me hooked.
My hair was that red, the kind of red that looks okay on everything but people, because a person’s hair is not supposed to be red. Orange, yes. Auburn, sure.
But not lobster red.
I took my pigtails, pressed them against the glass, and stared the nearest lobster straight in the eye.
Dad said my hair was lobster red. My mother said it was Communist red. I didn’t know what a Communist was, but it didn’t sound good. Even pressing my hair flat against the glass, I couldn’t tell if my dad was right. Part of me didn’t want either of them to be right.
“Let me out,” said the lobster.

Hi there, Esteemed Reader! I hope this post finds you well and set to have a Merry Christmas (or whatever holiday you prefer) and a Happy New Year. Next week we'll have a guest post and then I'm signing off until 2016. The blog has been a little slow here recently as I'm devoting most of my energy into preparing a massive horror serial novel for adults (details coming in my first post of 2016). But I couldn't finish the year without telling you about Francesca Zappia's wonderful novel.

I had the good fortune to meet Francesca earlier this year. We did an author panel with our old friends Shannon Alexander and Barbara Shoup. We were asked what made Indiana a great place for writers, or something to that effect. I don't remember what I said (something about how Hoosiers rock!!!), but I remember Francesca said that Indiana is Gothic and creepy, a good place for stories. At that moment, I knew she was a kindred spirit and that I wanted to read her novel as I'm endlessly fascinated by how my fellow Hoosiers craft Indiana tales.

Made You Up is a fascinating read and absolutely an Indiana story:

Hannibal’s Rest. Home.
Here’s the thing about Hannibal’s Rest, Indiana: It is astoundingly small. So small I’m sure it wouldn’t show up on a GPS. You’d pass right through without realizing you were anywhere different. It’s just like the rest of central Indiana: hot in the summer, cold in the winter, and the only way to know the weather other times of the year is to walk outside. You drive west to get to Hillpark and east to get to East Shoal, but nobody from either school can tell you the name of a single person who goes to the other, and they all hate one another.
My parents didn’t grow up here or anything. They chose to live in this nowhere town.

Meet Alex, named for Alexander the Great. She's transferring to a new high school her senior year after some trouble at her previous school that led to her being "chased out." Her father is somewhere in Africa and her mother is a strange person, homeschooling Alex's little sister to be a future strange person. Reading about the family made me wonder who the crazy person really was (spoiler, it's Alex).

You'll recall the first paragraph featured a talking lobster, which is always a wonderful way to begin a novel. In the next chapter, Zappia hits us with the first of many twists and surprises:

For two years after that fateful day in the supermarket, I thought I’d really set the lobsters free. I thought they’d crawled away and found the sea and lived happily ever after. When I turned ten, my mother found out that I thought that I was some kind of lobster savior.
She also found out all lobsters looked bright red to me.
First she told me that I hadn’t set any lobsters free. I’d gotten my arm into the tank before she’d appeared to pull me away, embarrassed. Then she explained that lobsters only turn bright red after they’re boiled. I didn’t believe her, because to me they had never been any other color. She never mentioned Blue Eyes, and I didn’t need to ask. My first-ever friend was a hallucination: a sparkling entry on my new resume as a crazy person.
Then my mother had taken me to see a child therapist, and I’d gotten my first real introduction to the word insane.
Schizophrenia isn’t supposed to manifest until a person’s late teens, at the earliest, but I’d gotten a shot of it at just seven years old. I was diagnosed at thirteen. Paranoid got tacked on about a year later, after I verbally attacked a librarian for trying to hand me propaganda pamphlets for an underground Communist force operating out of the basement of the public library. (She’d always been a very suspect type of librarian—I refuse to believe donning rubber gloves to handle books is a normal and accepted practice, and I don’t care what anyone says.

As you know, I'm not a mental health professional and thus far, I have no diagnosed mental disorders (but if you've read my books, you've got to wonder). So I can't vouch for how accurate Zappia's portrayal of schiziophrenia may be, which I realize is a point of controversy elsewhere, but it's a fantastic story device. Alex may be the most unreliable narrator I've ever come across and it's not her fault.

But the reader can't trust her and in a first person narrative, we never know which things are actually happening in a scene and which are in Alex's, not because she's hiding information from us or intentionally making things up, but because she doesn't know what's real:

The doctors were oodles of help, but I developed my own system for figuring out what was real and what wasn’t. I took pictures. Over time, the real remained in the photo while the hallucinations faded away. I discovered what sorts of things my mind liked to make up. Like billboards whose occupants wore gas masks and reminded passersby that poison gas from Hitler’s Nazi Germany was still a very real threat.
I didn’t have the luxury of taking reality for granted. And I wouldn’t say I hated people who did, because that’s just about everyone. I didn’t hate them. They didn’t live in my world.
But that never stopped me from wishing I lived in theirs.

One of my many rules of writing is that the more extraordinary a situation, the more normal the characters should be and vice versa. Since Alex is such an extraordinary character, her situation is mostly normal and it's compelling stuff. She wants to fit in and be normal. What teenager couldn't relate to that goal?

When she meets Miles, an equally interesting boy with a love of obscure history and a touch of autism, the narrative takes a turn of the familiar. Sure, he makes money by carrying out revenge pranks, but he's mostly friendly and he and Alex spar like Bennedict and Bernice in Much Ado About Nothing--me thinks they're might be something there.

The only issue, and it's a small thing, but Alex is concerned Miles might not actually be real. He might be an updated version of the same boy with blues eyes Alex remembers from the day she freed the lobsters:

He laughed and disappeared into the kitchen.
Was that Blue Eyes?
I grabbed the Magic 8 Ball and rubbed the scuff mark as I looked down into its round window.
Better not tell you now.
Evasive little b#@ch.

Whether or not Miles or any other story element is real or a fantasy created by Alex's treacherous brain is not for me to say. You'll have to read Made You Up and see for yourself and you'll be glad you did. Zappia's finely turned prose and sense of humor shine in this debut and I'm looking forward to seeing what she does next and I hope we bump into each other again so I can tell her how much I enjoyed this fun and interesting novel that's not quite like anything else I've ever read.

You'll laugh, you'll cry, you'll have a good time. Make your holidays happier by picking up a copy of this book. Should you need further convincing, I shall leave you as always with some of my favorite passages from Made You Up by Francesca Zappia:

It was ten-thirty, and the place was dead. And by dead, I mean it was like the entire possum population of suburban Indiana.

In AP Chemistry, Ms. Dalton seated us in alphabetical order and handed out lab notebooks, which look like notebooks on the outside but are filled with graph paper and make you want to kill yourself.

I turned to Art, a black kid who was a foot and a half taller than me and whose pecs were about to burst out of his shirt and eat someone. I gave him a two on the delusion detector. I didn’t trust those pecs.

Was there some kind of law about drop-kicking @#holes in the face? Probably. They always had laws against things that really needed to be done.


STANDARD DISCLAIMER: All reviews here will be written to highlight a book’s positive qualities. It is my policy that if I don’t have something nice to say online, I won’t say anything at all (usually). I’ll leave you to discover the negative qualities of each week’s book on your own.
Posted by middle grade ninja at 12:11 PM

Email ThisBlogThis!Share to TwitterShare to FacebookShare to Pinterest
Labels: Book Review, Francesca Zappia, Indiana, Made You Up, Young Adult