Book Review: THE GIRL WHO REMEMBERED HORSES by Linda Benson 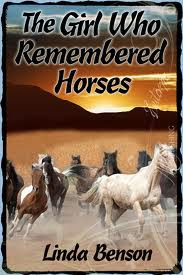 First Paragraph: Sahara awoke to a pounding inside her head. Thundering. Loud. Was it rain against the tent? Rain would bring relief from the dust and the smothering heat. She blinked, rubbing sleep from her eyes. She heard nothing. The sound must have been from the dream, the dream she had again and again.

Oh, Esteemed Reader, I've lost track of the number of girl-and-her-horse stories I've reviewed at this blog. However many it's been, it's too many for a grown man in his early thirties:) Don't get me wrong, I enjoyed Emma's River and Whirlwind and Linda Benson's The Horse Jar (I gotta say I like the Spanish title better: La Alcancia De Los Suenos, or, The Piggybank of Dreams).

I tease my writer's group that if I'm not happily published by a certain date, I'm going to break down and write my own girl-and-her-horse story. I'll call it The Hoof-print on my Heart:) I tell you all this so you will know it took a bit of convincing for me to agree to read yet another book about a girl and horses.

Musa Publishing is primarily an electronic publisher and why not? Most of the reading I do these days is on my Kindle. Ironically, I actually read a paper copy of The Girl Who Remembered Horses:) But I recently downloaded The Wrong-Coloured Dragon by Lynne Reid Banks, read it, and loved before I ever realized it had been published directly through Amazon rather than a major publishing house. Because what attracted me to the book was the author and the promised content, not the means of publication. I couldn't tell a difference between that book and an electronic copy of The Return of the Indian, the property of a major publisher.

It's an exciting time to be a writer with so many publishing opportunities available and I hope more established authors set off on their own, independent of publishers. It can only bode well for readers that so many more books become available without being narrowed through the ever-consolidating choke-points of major publishers. It's a power-to-the-people kind of thing.

Meet Sahara. She's the girl who remembered horses. See how Benson effortlessly introduces us to her on page 2:

Sahara hated being treated like a baby. She was almost thirteen.
"I'm here, sister."
Laurel appeared anxious to be off. "We have little meat. I will go down along the dry river bed and look for rabbits again. Stay in camp, start the fire, and don't forget to stir the stew."
Sahara made a face. Stay in camp. Build the fire. Stir the stew. Her chores were so boring. She wished she could do something important. Why couldn't she have adventures like her older sister?

Sahara isn't a fully-realized three-dimensional character at the end of this passage--it will take a whole book to get her there, but we know what kind of character she is. She's an impatient thirteen-year-old with a taste for adventure who feels oppressed by the older people in her life. A character such as this can't help but get up to some mischief. Before Benson starts in with the world of the post-apocalypse and all the new things the reader may not have encountered before, she makes sure the reader knows who the main character is and what kind of story this is likely to be.

It's important she ground us, because The Girl Who Remembered Horses is an unusual story with a lot going on. Mankind has all been wiped out by a huge epidemic, sort of like the Native Americans just before Columbus arrived. The details of the fall of our society are never made quite clear, but I like to imagine this story is set sometime after Stephen King's The Stand. As there's a rough and grizzled character referenced who's name is Roland, I wonder if Benson isn't also a fan of King's work:)

But this isn't the world of Ashfall, where everyone's trying to eat and/or rape everyone else. The survivors of Benson's apocalypse are mostly well-behaved folks, with the possible exception of Dojo, who really does seem to love the idea of murdering baby horses. It's refreshing to read a vision of the post-apocalypse in which mankind is rebuilding itself in a way that might just be better than its current iteration. I mean I wouldn't have minded if there had been some zombies, but The Girl Who Remembered Horses a nice change of pace in a genre typically dominated by pessimism.

Not that the lives of Sahara and her nomadic clan are without realistic struggles, chief among them travel and keeping everyone fed. No one remembers horses, but Sahara's been having dreams about them, and it's good timing as the clan comes across a pack of wild horses. Like Fiver in Watership Down, Sahara's been struck by divine inspiration and she has an idea the clan could train the horses to be ridden, which might be easier than walking about and having their junk hauled by dogs.

Can Sahara convince her clan to listen to someone as young as she, or will the murderous Dojo bathe in the blood of wild horses? I can't tell you without spoiling, so that's where we'll leave it. Except I had to chuckle, mostly because I've been a fan of Linda Benson for years now, and it amuses me that when she envisioned the darkest vision of the future it was a world without horses.

I think it speaks volumes about Linda Benson that for her, the key to mankind's survival in the post apocalypse is a kinship with animals. And the key to that kinship: a book, of course. Thankfully, an old woman has kept a collection of books, including a book on how to train horses:

The woman hummed to herself. It was hard to know if she had heard or not. "This modern age," she grumbled. "No one seems to think books are important. Everyone experimenting with new things--ways to grow crops and make shelters. No one comes to the old woman on the hill anymore."

Do yourself a favor, Esteemed Reader, and pick up a copy of The Girl Who Remembered Horses. It's a good read for tweens and the rest of us. As always, I'll leave you with some of my favorite passages:

Sahara hoped Laurel's hunt would be successful. Rabbits and small game were scarce this season. Deer, too. She could barely remember the last time she'd eaten venison. Coyotes yodeled in the distance. She cursed them silently. They hunted, too, but at the expense of her full stomach.

Ash was only nine, but surely old enough to hear about the realities of life.

From the eating hall, the smell of baking bread and spicy herbs mingled with the odor of many humans.

A few pale strands of light lingered to the west.

She gulped, drinking in the cold air.