Angie Karcher and I talk quite a bit about writers conferences, specifically how to get the most out of them and things writers shouldn’t do when attending one. Who better to discuss conferences with than the Indiana Regional Advisor for the Society of Children’s Book Writers and Illustrators who also hosts her own writers conference? We also discuss rhyming picture books and writing about local Hoosier history, including the infamous Grey Lady ghost of Willard Library. 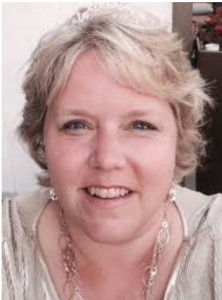 Her poetry is included in AN INDIANA TRIBUTE BICENTENNIAL ANTHOLOGY, compiled by Byron Buckley 2017.

Angie is the creator of Rhyme Revolution. This annual event held in April, is a writing challenge on her blog for children’s authors. She has a passion for writing rhyming picture books and poetry and encourages educators and parents to read rhyme frequently to children. Rhyme encourages language development and fosters a love of reading.

Angie is the founder of The Rhyme Revolution Conference, held first in New York City in December 2015 and next in New Harmony, Indiana, October 2018. This conference supports and encourages children’s writers to use proper picture book writing techniques, as well as applying perfect meter and rhyme.

Angie also founded and hosts The Best in Rhyme Award, announced annually in February in New York City, NY, naming the best rhyming picture book and several honor books each year.
Her most recent endeavor is hosting Ms. Angie’s Craft Corner for KidLitTV. This will be a monthly recorded segment where she shares simple crafts for kids, teachers, parents and librarians that accompany her favorite picture books.

Angie frequently presents at schools, libraries, bookstores and writing conferences. She is the Indiana SCBWI Regional Advisor and lives in Evansville, Indiana with her husband and four teenage children. Her beloved beagle Gracie and Miniature Dachshund Lucy are her constant assistants.

Angie is represented by Victoria Selvaggio with Storm Literary Agency. 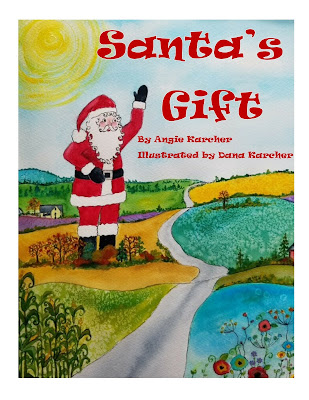 Once upon a time a 35 foot tall Santa stood at the edge of town waving his mitten to all the good boys and girls as they left home or returned from out of town, smiling a hello or goodbye. He was a beloved landmark with his red suit and blue eyes. After 20 years of wishing safe travels to those that passed by, his bright red suit had faded, his beard had become chipped, and he had lost the twinkle in his eyes. Then one day… Santa disappeared.

Santa had been hauled off to a junkyard where he lay, face-down and forgotten. One day a local resident found Santa and decided to “Stand Santa Back Up.”

Santa’s Gift is the story of how a community came together to save a beloved landmark, restoring him back to his original jolly self and finding him a new home where he once again can wave safe travels to all that pass by.

SANTA’S GIFT is a book for the young and young at heart. It is a great story to share with your children or grandchildren and will include documentation of the restoration of Evansville, Indiana’s Santa statue. Do not delay – Order your copies TODAY!

A portion of the proceeds will go to support and sustain this historical landmark! Many thanks to Ron McKeethen for finding and saving Santa!

Rhymerev.com
Posted by middle grade ninja at 7:55 AM