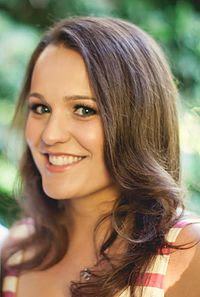 It was when Clelia first read Charlotte’s Web in the first grade that she got hooked by the magic of books. Her love of children’s books carried through adulthood and she is delighted to dedicate her life to bringing quality books and stories to young (and whimsical adult!) readers.

Clelia is originally from the suburbs of New York City, but has also lived in Boston, Washington, DC, and now Seattle, a city she loves. She is a former corporate lawyer who joined Martin Literary Management as the head of their kid lit division in September 2013. Clelia represents authors of picture book, middle grade and young adult books.

Charlotte's Web --The second novel I ever read and it had a profound effect on me. I reread it every September right before school started every year through my first year law school.

Harry Potter series -- I realized I was attracted to the man who became my husband when we both brought The Deathly Hallows to work the day after it came out. Needless to say, we were the only lawyers at our law firm who did that.

My favorite thing I read this year was the Elena Ferrante Neopolitan series. It shook me to my core.

Father of the Bride -- Tears and heart-warming. Every. Single. Time.

Lord of the Rings trilogy -- I don't even typically like fantasy that much, but my love for this epic adventure is very intense.

All time adult show: The Office

I'm obsessed with talk shows--morning, late night, political, celebrity--any kind, really. Right now I'm very into The Late Late Show with James Corden because he has all his guests have a conversation together and I've always loved Real Time with Bill Maher for the same reason. We also watch an insane amount of Charlie Rose in my house.

Beautifully talented! Also, professional, open to revision and reimagining, not too sensitive, and understanding that the path to acquisition can be a long, hard road with many twists and turns.

Right now, I am very keen on developing my YA and middle grade lists.  I love anything with a historical or true life bent to it. Memoir or narrative nonfiction will always appeal to me. I feel very strongly about doing my part to promote diversity in kid lit, so I like to see stories from voices or perspectives we need to see more of.

I also acquire picture books. I tend to love modern-humored, story-driven picture books that touch on universal experiences or emotions. And nonfiction!

My favorite thing is that I feel like I am using all of the skills I have--I am a good editor and writer, I am good with people, and I have a legal background that makes me very comfortable with contracts and negotiations. I'm being put to good use!

Least favorite thing -- The acquisition process can be very slow, which is frustrating.

Read as many books in the genre that you are writing in, particularly books written in the last couple of years. It will only make you a better writer to see the genre done well, done poorly, and done mediocrely. It will also give you a sense of what the most current marketplace looks like.

JK Rowling. I know her head is filled with 100,000 Harry Potter stories and I just want to have a 56 hour lunch with her where she tells me all of them.

CleliaGore.com
Posted by middle grade ninja at 8:37 AM