Book Review: THE MONSTER IN THE MUDBALL by S.P. Gates 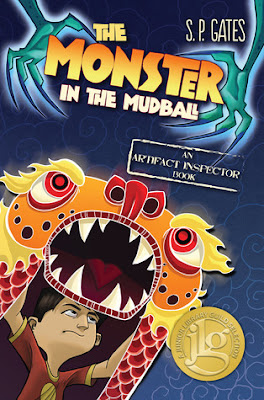 First Paragraph(s): Madalitso dragged a chair over to her wardrobe. It took almost all her strength. Shakily she climbed up onto it. Her legs were as thin as sticks. But her eyes blazed with fierce determination.


Her lips began to move. “Are you listening,  Zilombo?” she whispered. “I know you can hear me in there.”


She was talking quietly. There were only two things on top of her wardrobe. One was a battered cardboard suitcase—the one she’d brought with her sixty years ago, when she came to England from Africa. The other was a ball of dried mud, slightly bigger than a football and covered in dust and cobwebs.


“I have kept you shut up here for twenty years,” said Madalitso. “This is a harsh punishment. But what else could we do after the terrible thing you did?”

Here's a fun read for us to discuss, Esteemed Reader, and author S.P. Gates will be here Thursday to face the 7 Questions. It's going to be a good week.

First, let's talk about that opening. It's unusual to open a middle grade novel with the actions of an adult rather than a child protagonists, despite that being the exact way Harry Potter and the Philosopher Stone opens (S.P. Gates is English, so I'm using their title this week). The trick to opening a book for children by discussing the actions of an adult is to intrigue the reader. This is a good idea when opening any story, but essential when opening with a grown up.

We meet Jin Aaron Sparks, our eleven-year old protagonist, soon enough. Actually, we meet him in chapter one. But first there's this business with Madalitso, grown-up. She's not in the story for long, but we open with her and for the time she's present, her job is to introduce the conflict that will plague Jin.

What I like about this opening is that it raises questions. Why is Madalitso talking to a ball of mud? Keen readers may pick up on the significance of a ball of mud in a book titled The Monster in the Mudball:)Why has this ball of mud been shut up for twenty years and what terrible thing did it do to deserve this harsh punishment. When Madalitso exits stage left, which she does soon after this scene (not by getting killed, don't worry), she will be leaving behind a mystery and source of conflict for our heroes.

One of S.P. Gates great gifts is introducing interesting characters who feel real as a result of the specific characteristic she assigns them:

It was his big sister Frankie, lounging along the towpath toward him. Frankie was slight, bird-boned like Mum and Grandma Tang. But she'd inherited their dad's height. She looked, as usual, like a fairy at a funeral. Except for those thick woolly black tights and clomping biker boots.
Fankie bought party frocks from charity shops. Frothy, fancy frocks with big skirts, dripping with lace and net layers and frills and sequins. But she always dyed them deepest black to match.
"You a Goth" Jin had once asked her.
"I'm not anything" Frankie had fumed, insulted. "I'm me, right? Just me, Frankie."

Contrast that description with this introduction of a magical character not grounded in ordinary, everyday details:

Jin stared at her, his eyes popping. He'd seen inspectors before, in his school. But they mostly sneaked around silently, wearing gray suits, blending into the background. They said things like "Pretend I'm not here."
This inspector was nothing at all like that. Everything about her shrieked, I have arrived!"
She'd burst like a firework display into this quiet little cul de sac of gray, pebble-dashed bungalows. She had a wrap wound into a high crown around her head. Her head wrap and skirt were the same pattern--sizzling-hot red, flaming orange, and scorching yellow zigzags.

A.J. Zauyamakanda, or Mizz Z for short, is the Chief Inspector of Ancient Artifacts, which is like being a Man in Black for fantasy creatures rather than UFO inhabitants.  Her job is to inspect ancient artifacts, of course:

"Madalitso knew her artifact might be dangerous," Mizz Z told Jin. "But he was a exception. Most owners of the things I inspect have no idea. They don't know what power is hanging on their walls, or stored, forgotten, in trunks in their attics."
"Don't you tell them?" asked Jin.
"Of course not," said Mizz Z with a scathing look. "Why scare people if you don't need to? Besides, many owners don't even know I have visited. I do many of my inspections under cover of darkness."

So getting back to that mudball we were discussing. Is there any chance there could be a monster in there? Any chance that monster Zilombo who just needs to get wet like a Gremlin to become a terrible beast not unlike a crocodile, but worse? Esteemed Reader, the could be such a chance. Worse yet? Zilombo, the terrible beast from the sewers that reminded me of the Korean horror film The Host (a Ninja favorite), has a taste for babies, as Mizz Z knows all too well. Babies such as Jin's baby brother Smiler!

I loved The Monster in the Mudball. It's interesting characters in pursuit of a monster from page one to the end. What's not to like? Also, it's effortlessly multicultural, by which I means it features a cast of characters from different cultural backgrounds without ever making it a thing, which is the best way to do it. At no point does S.P. Gates slow the story down to comment on how neat it is that such diverse folks are all getting along. Instead, she throws the characters together and focuses on kids chasing baby-eating monsters, which is what we paid for.

The book closes with a blatant promise of a book two and one of the best uses of an epilogue I've ever seen. "Here, here," I say. Bring us more like this and right quick:) The Monster in the Mudball is a fun read for kids and parents alike and the start of what looks to be a great series.

As always, I'll leave you with some of my favorite passages from The Monster in the Mudball:

But he felt just as mixed up as before. There were so many things he wanted to know. Like why she was wearing an eye patch. So he asked her.
"Why are you wearing that eye patch?"

"Excuse me, but is not spraying dragons everywhere illegal?" commented Mizz Z.
Frankie's eyes immediately blazed defiance. She got enough of that kind of talk from Mum. This stranger should mind her own business! Frankie sprayed her answer on the wall in a few quick, furious blasts. "SO WHAT?" it said, in huge, spiky red capitals.

Smiler didn't know, but it was called a slime mold, a kind of fungus that glows in the dark. It flowed down the wall like green ice cream. It threw its eerie green light on Smiler's face. He grinned at it, tried to grab it. But it was high above him. Never mind. There were more slime molds ahead of him, growing inside the pipe like a sinister midnight garden. One dripped neon orange. One, far ahead, was white and glimmered in the dark like ice crystals.
Gurgling with pleasure, Smiler headed for it. He had a very fast crawl, especially when it was to grab something he wanted. With his spiky hair, he looked like a running hedgehog as he scuttled along in the gloom, lit only by the slime mold's creepy glow.


STANDARD DISCLAIMER: All reviews here will be written to highlight a book’s positive qualities. It is my policy that if I don’t have something nice to say online, I won’t say anything at all (usually). I’ll leave you to discover the negative qualities of each week’s book on your own.
Posted by middle grade ninja at 8:19 AM

Email ThisBlogThis!Share to TwitterShare to FacebookShare to Pinterest
Labels: Book Review, Middle Grade, S.P. Gates, The Monster in the Mudball