Middle Grade Ninja is available on Soundcloud, Stitcher, itunes, Podbean, Podblaster, RadioPublic, blubrry, Listen Notes, Google Play, and many other fine locations.
Melissa Hope and I discuss her popular YouTube channel for authors, HOPEFUL HAPPENINGS, and how it paved the way to publish her debut novel, SEA OF KINGS. We chat about how she taught herself to write, collaborating with her marine biologist husband, working with Jolly Fish Press, finding beta readers, scheduling time to read while raising three kids, music to write to, and more. Melissa also shares how she found herself represented by an untrustworthy agent and how other writers can avoid finding themselves in a similar situation. Please note, there was a slight broadcast delay when we recorded, so we occasionally interrupt each other.

Here are links to the soundtracks we discussed: 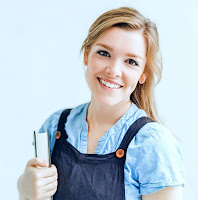 Melissa Hope earned her degree in English and is passionate about sharing her knowledge to help writers improve their craft and connect with the writing community. She escaped the frostbite normalcy of Canadian winters to live in Florida with her family, bipolar cat, and growing collection of scuba gear.
Visit her website www.authormelissahope.com to watch free writing tutorials. 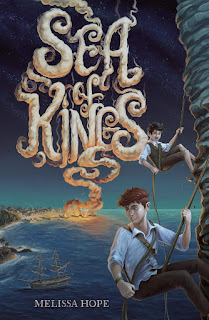 Thirteen-year-old Prince Noa has hated the ocean since the day it caused his mother’s death. But staying away from the sea isn’t easy on his tropical island home, where he’s stuck trying to keep up with his dim-witted and overconfident younger brother Dagan—the brawn to Noa’s brains.

When a vengeful pirate lays siege to their home, Noa and Dagan narrowly escape with their lives. Armed with a stolen ship, a haphazardly assembled crew, and a magical map that makes as much sense as slugs in a salt bath, the brothers set sail for the realm’s other kingdoms in search of help.

But navigating the sea proves deadlier than Noa’s worst fears. To free his home, Noa must solve the map’s confusing charts and confront the legendary one-eyed pirate before an evil force spreads across the realm and destroys the very people Noa means to protect.

Posted by middle grade ninja at 8:50 AM