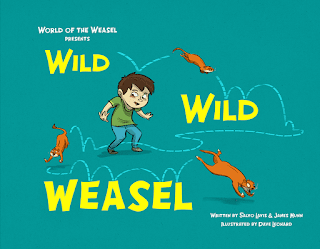 We write children’s picture books about an elementary school-aged boy and his marvelous pet weasel. Often we are asked—understandably so—for what age groups our fun little episodes are intended. The answer: children between four and ten years old and the adults who read with them. But the deeper truth: anyone and everyone.

Humans love a good story and are not always picky about the source. In the pursuit of meaningful entertainment, boundaries between story formats rarely seem to matter. Storytelling method becomes secondary if the story is strong and the characters speak to the audience. And, if done right, a picture book can have the similar effect as a comic or graphic novel--both of which are widely read by readers of chapter books.

Also, it certainly helps to be funny. In Wild Wild Weasel, our second adventure in the World of the Weasel book series, the boy imagines all sorts of things he can train his pet weasel to do, from chauffeuring the boy around to shampooing the boy’s hair. Laughter knows no age. 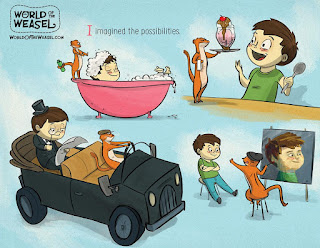 In addition, it helps to include words that the child may not know but will come to learn and use in later years. “Pandemonium” and “rambunctious” may not roll trippingly off the tongue of the average first grader, but in Once Upon a Weasel, our first book, we wanted to include words that would be fun for the parent to say to the child and also make the child curious about their meaning.

And it helps to create a complex story where new details are revealed with each reading. In Wild Wild Weasel, some visuals may very well escape notice upon first glance—a pigeon holding a diploma in its beak, a bunny stuck in window blinds, an astounded fish lifting itself onto the edge of its bowl to get a better look at the action. (And, as you read all of our books, look for one particular little girl who simply cannot seem to stay awake.)

Middle-grade readers then have an opportunity to laugh, learn, teach, and discover. We think that’s golden, and we hear from plenty of young people who agree!

All of these things we have been learning since we first decided to write kids stories. And we continue to check ourselves to make sure that the story is trim and that every word tells. Our first drafts always contain too many words, which is often the case for any writing project. But for picture books especially, each word is carefully considered. By the time illustrator Dave Leonard gets to work it becomes clear that many of our story points come across better in illustration. Thus begins another round of culling words. (We always knew a picture was worth a thousand words, but that old idiom was never so profoundly felt until we began creating picture books.) Sometimes we describe too much, or grip the reader’s hand too tightly as we lead them down an obvious road, or try to make things overtly Meaningful with a capital M. The end product, we hope, is a balance between showing and telling.

Indeed, we are learning. Trust the reader and let them discover things on their own. If they don’t grasp everything at first, they will when they reread the book years later. And they’ll feel good about the discovery.

In the end, we as a creative team don’t really have the middle-school student or the adult or even the four-year-old in mind when we write. To us, the age of the reader is immaterial. After all, adults go to see animated films geared toward the younger set. Why shouldn't tweens and teens read picture books? We simply tell a story that entertains us. Then we hope that people of all ages like it—you too! 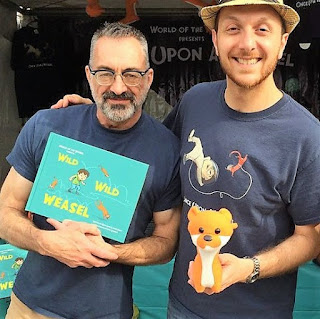 Salvo Lavis is a writer and producer who has worked in digital, video, print, and radio. He established the online brand for indie film distributor Cohen Media Group, where he directed social media Oscar campaigns for the Academy Award-nominated films Timbuktu and Mustang. He has also produced content for Disney.com, Yahoo! Entertainment, and Live Nation. His personal interests include math, science, and design. Salvo is from Houston and lives in Los Angeles, California.

James Munn is a freelance writer, film historian and former editor at Architectural Digest. In addition, he and his friends Salvo Lavis and Dave Leonard have created the World of the Weasel series of children’s books, which includes the titles Once Upon a Weasel and Wild Wild Weasel. He is the author of This Is No Dream: Making Rosemary’s Baby and recently edited Autobiography of a Magazine: 1920 – 2010, an illustrated history of Architectural Digest by former editor-in-chief Paige Rense. James grew up in rural Nebraska and currently lives in Hollywood, California.

WORLD OF THE WEASELpresents picture books about a young boy and his pet weasel who injects excitement into the boy’s quiet life and helps stimulate his imagination. Published by Spitball Studio, the series currently has two books available with more to follow. There’s also handmade plush dolls as well as fun t-shirts for adults and kids. 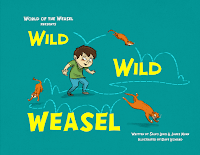