Author and former children’s book editor Caroline Gertler and I discuss her debut novel, MANY POINTS OF ME. We also chat about her studies of art history, her time working for the Metropolitan Museum of Art, how she chose her literary agent, how she made the mental transition from editor to author, how she writes intuitively for children while gaining character insights from children, her distinct prose style, and so much more more.

Caroline Gertler is the author of the middle grade novel MANY POINTS OF ME (Greenwillow/HC, January 2021). A former children’s book editor, Caroline has an MA in art history, and gives tours of Old Master paintings at the Metropolitan Museum of Art.
Caroline grew up in New York City and lives on the Upper West Side with her husband, two daughters, and dog, Dash—which happens to be one of her favorite forms of punctuation! 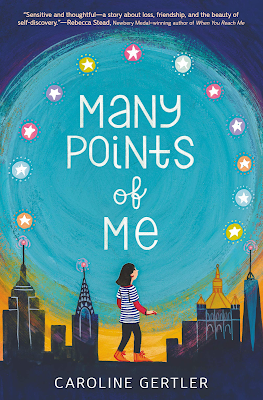 Georgia Rosenbloom’s father was a famous artist. His most-well-known paintings were a series of asterisms—patterns of stars—that he created. One represented a bird; one, himself; and one, Georgia’s mother. There was supposed to be a fourth, but Georgia’s father died before he could paint it. Georgia’s mother and her best friend, Theo, are certain that the last asterism would’ve been of Georgia, but Georgia isn’t so sure. She isn’t sure about anything anymore—including whether Theo is still her best friend. Then Georgia finds a sketch her father made of her. One with pencil points marked on the back—just like those in the asterism paintings. Could this finally be the proof that the last painting would have been of her? Georgia’s quest to prove her theory takes her around her Upper West Side neighborhood in New York City and to the Metropolitan Museum of Art, which was almost a second home to Georgia, since she had visited favorite artists and paintings there constantly with her father. But the sketch leads right back to where she’s always belonged—with the people who love her, no matter what.
CarolineGertler.com
Posted by middle grade ninja at 9:18 AM

Email ThisBlogThis!Share to TwitterShare to FacebookShare to Pinterest
Labels: Caroline Gertler, Interview, Many Points of Me, Middle Grade, Podcast