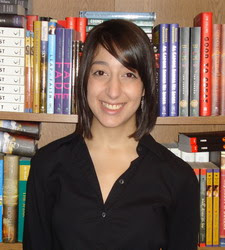 Sarah represents both adult and YA fiction, and is looking for literary fiction, magical realism, dark/psychological mystery, literary horror, and upmarket commercial fiction with strong characters. Sarah would also love to find a literary Middle Grade novel in the style of Rebecca Stead, Katherine Applegate, or R.J. Palacio.

Sarah runs a literary blog called Glass Cases (http://glasscasesblog.blogspot.com) and can be found on Twitter at @sarahlapolla.

The Perks of Being a Wallflower by Stephen Chbosky. I can’t think of another book that means as much to me as this one does. If I had to name others, I’d say The Catcher in the Rye, Pride and Prejudice, The Amazing Adventures of Kavalier and Clay, Bright Lights Big City. Then of course there are short story collections by Raymond Carver, Lorrie Moore, and Flannery O’Connor. Memoirs and essay collections by Joan Didion, David Sedaris, Mary Karr, E.B. White, George Orwell, and all-time young adult favorites like The Outsiders and Harry Potter (Prisoner of Azkaban is my favorite). And… wait, you said name only three, right? Sorry.

Movies: Wonder Boys, The Philadelphia Story, and When Harry Met Sally… and I have a very special place in my heart for Wayne’s World that I can’t describe in words.

First and foremost, an ideal client is someone whose book I love. Not just like a lot or think I can probably sell, but love. Clients should know what they want from their agent and understand the role an agent plays. Mutual respect is a major part of a successful working relationship.

I represent adult and YA fiction in the genres of literary fiction, upmarket commercial fiction, science fiction, low fantasy, magical realism, psychological mystery, and literary horror. An ideal query for me should fall within those parameters, and have two things:

1) Great characters. A good character has a life outside of whatever book they’re in, and I want to be able to think about them after the story ends.

2) Something that surprises me. [Note: Not shock value!] I want a book that surprises me in some way, whether it’s through the style of the writing, the type of character I’m following, or an element of the plot I didn’t see coming.

The worst part, easily, are rejections. Everyone gets rejected in this business. It sucks when I’m the one being rejected, and it sucks even more when I have to reject people.

Be patient. Ignore all of those “14 year old prodigy lands 6-figure-deal” headlines and don’t worry about when it will “happen” for you. There’s no expiration date on having a writing career. If you’re meant to have one, it’ll happen eventually.

In one of my clients’ cases, she had been querying since before I became an agent. She just needed to wait for me to come along, and now she has two published books. If you want an agent and receive 50 rejections, either query 50 more or write something new to query.

Even after you get an agent, the process doesn’t speed up for you. You could be on submission for months, and then after your book sells, you won’t see it published for another 18 months. Sometimes longer. Just, be patient.

Can I pick one living and one dead? (I’m breaking rules all over the place with this interview!)


Living: David Sedaris. It’ll be entertaining, for sure. I’m such a fan of his in general. But mostly I want to be able to tell him that he’s a major reason I ended up where I did, and how grateful I am that he showed me nonfiction could be like that. Then I think it’d be fun to watch him uncomfortably change the subject after I gush over him.

Dead: E.B. White. Another essayist and another huge influence. We’d talk about New York and how it’s changed, and how it hasn't really changed at all. I’d want J.D. Salinger to sit at the next table, but by himself. He won’t have to talk to me if he doesn't want to.

Posted by middle grade ninja at 8:31 AM