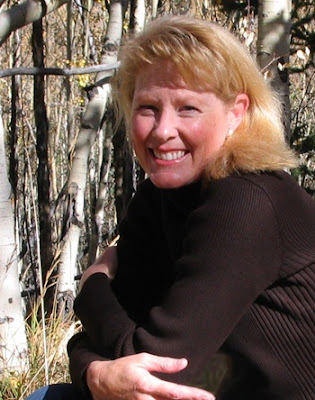 All her life, the archetypal hero and his journey have enthralled Darby Karchut. A native of New Mexico, Darby grew up in a family that venerated books and she spent her childhood devouring one fantasy novel after another. Fascinated by mythologies from around the world, she attended the University of New Mexico, graduating with a degree in anthropology. After moving to Colorado, she then earned a Master’s in education and became a social studies teacher.

Drawing from her extensive knowledge of world cultures, she blends ancient myths with modern urban life to write stories that relate to young teens today.

Darby is a member of the Society of Children’s Book Writers and Illustrators and the Pikes Peak Writers Guild. She lives in Colorado Springs, Colorado with her husband, where she still teaches at a local junior high school. She enjoys running, biking, and skiing the Rocky Mountains in all types of weather.

Griffin Rising is her first novel. She is currently working on the next books in the series, Griffin's Fire (April 2012) and Griffin's Storm (December 2012). Her middle grade novel, Finn Finnegan, will be released March 2013 from Spencer Hill Press. The next book in the Finnegan series, Gideon's Spear, will be released from Spencer Hill Press in February 2014.

Click here to read my review of Finn Finnegan

The Lord of the Rings, the Prydain Chronicles, the Ranger’s Apprentice series. In that order.

Since I teach full time (7th grade social studies – go Thunderbirds!), I try to write two or three hours each evening and another fifteen minutes at lunch. On weekends, holidays, and summer, I probably triple that amount. As far as reading goes, I usually read for about an hour in bed right before I go to sleep. I have not watched television in years. Except Game of Thrones. And, well, Broncos football games. Of course, book promotion and editing often steals those hours. My writing time is incredibly precious to me right now. I’m so fortunate to have a husband who supports me in my endeavors. (Wes, if you're reading this – I love you, man!)

I had been keeping my eye on Spencer Hill Press for months – they are only open for submission for a few weeks each year. I really wanted to be with them because they are one of the hottest YA publishers around. But since they don’t publish middle grade, I hesitated. Finally, at the end of 2011 when they re-opened for submission, I sent them Finn Finnegan on a what the heck–the worse they can do is say no whim.

Taught. I think all the reading I’ve done throughout my life is why I started writing. There’s an old expression that you read and you read, gorging yourself on the written word, until one day, you vomit up a book. That’s totally me. I work at improving my craft by reading really great books by really great writers, then applying what I learn to my own writing. My husband calls it Karchut University.

My favorite thing about writing is revising. I love polishing the rough draft over and over until it shines. My least favorite thing about writing is the first draft. Talk about a bloodletting. It’s probably because I edit as I write, which slows the flow, but I can’t stand to write sloppy. Lawrence Block, the author of Telling Lies for Fun and Profit (one of the classics how-to-write books) cautions writers from writing sloppy first drafts because we are teaching ourselves to write badly. That advice works for me and fits my OCD personality. It may not work for others.

There are two pieces of advice I’ve heard from many authors that I’ve always followed:

A. Read. Read everything. Read all the time. Read the genre you write. Read other genres.
B. Write the books you like to read. I love boy books featuring heroic masters and apprentices, so that’s what I write. I suck at writing females; although rumor has it I am one.

I would love to have tea with The Great One: J.R.R. Tolkien. I would love to listen to him ramble on about Middle-earth. Maybe have him teach me a few words of Old English. Or Norse. Norse would be cool. And we could draw maps. I’d bring the colored pencils!

Posted by middle grade ninja at 8:57 AM