David Neilsen and I discuss the advantages of traditional publishing and independent publishing and why he transitioned to a hybrid author with his newest release, LILLIAN LOVECRAFT AND THE HARMLESS HORRORS. We also talk about his time as a screenwriter, how he narrated his own audiobooks, book marketing, hosting murder mystery parties, leading ghost tours, and so much more.
Read his guest posts:
"The Horrors of Writing Middle Grade Horror or Why Books Aimed at Children Can’t Be Awash in Blood" by David Neilsen

"Beyond the Doors: Find Your Avocados!" by David Neilsen 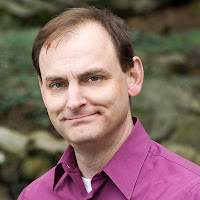 David Neilsen is the author of odd, weird, supernatural, and occasionally slightly disturbing stories. He is the author of Doctor Fell and the Playground of Doom, Beyond the Doors, and Lillian Lovecraft and the Harmless Horrors. David is based next door to Sleepy Hollow, NY and also works as a professional storyteller up and down the Hudson River Valley. His one-man performances based on the work of H.P. Lovecraft have sent many screaming into the hills in search of their sanity while his education school presentations have inspired hundreds of Middle Grade-aged children. 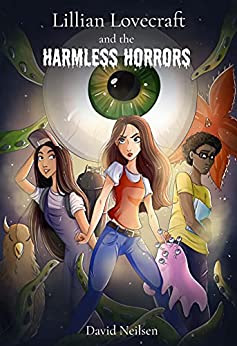 Lillian Lovecraft has a problem. An demonic horror from another realm has latched on to her, following her around everywhere and continually asking her for mustard. No one else can see or hear the gelatinous horror (named Frank), so only Lillian can tell when it's trying to fit kids' heads into one of its three mouths or flopping on top of her teacher's head.
The annoying and obnoxious tag-along is only the tip of the iceberg. A demented genius is trying to open up a portal to Frank's realm, catching the attention of a monstrously-evil being who can only glare out at us with his double-decker bus-sized eyeball until the portal is enlarged. As the demented genius works to rip a bigger and bigger hole in the fabric of reality, more and more horrors slip into our world--many of them not nearly as harmless as Frank.
It is up to Lillian, Frank, and her friends to somehow corral and capture these horrors and stop the demented genius before he the portal is large enough to allow the being of ultimate evil to enter our world and devour all of humanity.
David-Neilsen.com
Posted by middle grade ninja at 10:54 AM

Email ThisBlogThis!Share to TwitterShare to FacebookShare to Pinterest
Labels: Beyond the Doors, David Neilsen, Doctor Fell and the Playground of Doom, LILLIAN LOVECRAFT AND THE HARMLESS HORRORS