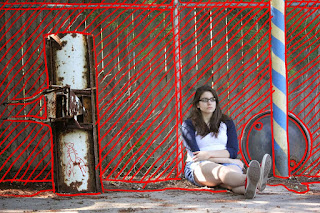 Francesca Zappia lives in Indiana, majors in Computer Science at the University of Indianapolis, and still isn't sure exactly how that happened. She spends most of her time writing, reading, drawing, watching anime, and playing way too much Pokémon. Some of her stories have nice neat endings, and others don't have very neat endings at all.You can find her on Twitter @ChessieZappia, Tumblr (exeuntstormtroopers.tumblr.com), and on her website, www.francescazappia.com.


1- The Hero and the Crown by Robin McKinley
2- Harry Potter and the Prisoner of Azkaban by J.K. Rowling
3- Fire by Kristin Cashore

I spend at least half an hour each day writing, but if I don’t have to work that day, I’ve been known to write from the minute I get up until I can’t hold my eyes open anymore. It really depends on the story I’m working on and what my schedule looks like. As for reading, I try to get in an hour of reading every day while I exercise, but if I really can’t put the book down, I’ll spend 4-6 hours finishing it in one day. (Definitely did that with Fire!)

I started writing when I was eight years old, but when I was fifteen I realized that publishers don’t just pick books off trees somewhere; writers have to send them in. I did some research, started looking for literary agents, and the summer after my freshman year of college, it all paid off. I got an agent, and six months later we’d sold my first book to HarperCollins. I did a lot of work over many years, but I also got very lucky, and I’m thankful every day for the happy circumstances that got me here.

A little of both, which I think is true for any skill. You can be born with an aptitude for anything, but if you never practice or try to improve your skill, you’re not going to go anywhere. On the flipside, maybe you don’t have an aptitude for a specific something, but if you practice it often, you can become much better at it. It also helps if you enjoy what you’re doing.

I can’t say whether or not I have an inborn aptitude for writing, but I know that I practice it a lot, I learn from reading, and I love doing it, so that’s enough for me!

Brainstorming! I LOVE coming up with ideas, especially for fantasy, sci-fi, and horror stories. Nothing beats the rush you get when a great idea hits you, then knowing that you can actually put it into a story.

I enjoy editing, too, which is weird because editing is also my least favorite part. It’s my least favorite because sometimes I just want a story to be right the first time around, sometimes because I don’t like it that much or because I have other books I want to work on, but when I figure out a way to fix the problems in the story and make it better, it all feels worth it.

If you want to write books, write books. It’s difficult, and it takes a long time, but if you have the passion for it I promise you can do it. Don’t worry about whether it’s good or not. And don’t feel obligated to write “literary” or “highbrow” fiction unless that’s what you love. Write what you want, because when you enjoy it, you’ll do it more, and you’ll get better at it.

J.K. Rowling. I’d probably be too star-struck to speak, though. Harry Potter was the reason I started writing in the first place, and it was my life from ages six through eighteen. I’d be grateful just to be in her presence.

Email ThisBlogThis!Share to TwitterShare to FacebookShare to Pinterest
Labels: 7 Questions For Writers, Francesca Zappia, Indiana, Interview, Made You Up, Young Adult