GUEST POST: "Stepping into the Past (Researching and Writing Middle Grade Historical Fiction )" by Yona McDonough 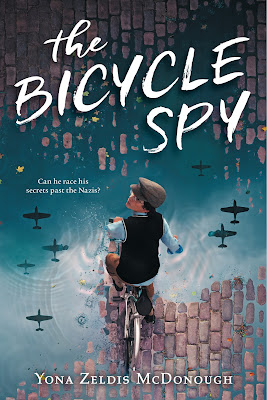 Even as a kid, I loved stories set in the past (Anne of Green Gables, A Little Princess and A Tree Grow in Brooklyn were all favorites) and when I grew up to become a children’s book author, I gravitated naturally to creating historical fiction set in long-ago times.  So when I was tapped by Scholastic to write a middle grade chapter book set in WW II era France, I jumped at the chance.

Called The Bicycle Spy, it was to center on a 13-year-old boy who has no clue that his parents are part of the French Resistance movement. Since he’s an ardent cyclist and they own the bakery in town, they ask him to deliver loaves of bread to various neighbors and relatives without arousing his suspicion.  But the discovery, early on in the story, of secret, coded messages that have been baked into the loaves absolutely rocks his world.

Since I’d had experience in this genre before, I assumed the research and writing follow a certain pattern.  But I found that this particular book created demands of its own.  For one thing it was slated to be longer than any such book I’d done before.  And while I had previously used the past as a setting—WWI, WW II, the Great Depression—in those books the history was more of a backdrop against which events unfolded whereas in The Bicycle Spy, certain historical events, such as the German occupation, played significant and even pivotal roles in the plot.

Obviously, I knew where and how to begin. Books and the Internet provided plentiful sources—sometimes too plentiful.  So much dense material to wade through was difficult enough for me, but what about for my young audience? I wanted the book to be fact-based and informative, but not daunting.  So I turned to sources that were intended not for adults, but for other kids.  Books, like those from the excellent DK series, provided substantial material that was suited to young readers and I drew on them, as well as others like them,  to help me sort my way through the complexities of the period.

I also relied heavily on visual images that were widely available on line and in books.  Although The Bicycle Spy’s sole illustration was on the cover, I wanted to steep myself in period details and have images at my fingertips—and in my mind’s eye.  Uniforms worn by French and German soldiers, the loaves of French peasant bread like those that housed the coded notes, maps that showed the occupied territories and most popular escape routes—all these mental pictures added to my understanding of the time and place about which I was writing.

Another subject to tackle was the Tour de France because Marcel, the protagonist, is a cycling enthusiast.  I familiarized myself with the history of the Tour and learned the names of its winners, especially during the relevant years. I learned about the origins of the race, as well as its early history. Research of this kind proved invaluable.

But there was more to the novel than research. I was writing about France in the 1940s for kids in the 2000’s and had the job of making Marcel and his pals sound both believable as characters from the past yet also relatable to readers of the present.  I had to think carefully about the dialogue.  It couldn’t be too contemporary—no, hey dudes—but it couldn’t be too fusty either.  I also wanted to use French terms and phrases where I could without putting off a reader who might not be familiar with them.  In order to do that, I sprinkled the French in sparingly yet I hope judiciously, and provided translations alongside the foreign words.  I also added a glossary at the end as another way of explaining these terms more fully.

Another important element in writing middle grade historical fiction is the strategic use of back matter.  Back matter is catnip to librarians and teachers, and I’ve heard from many kids how much they love it too.  Back matter is a way of adding context without bogging down the story and I’ve learned to be a bit creative with it.  In addition to the glossary, back matter for The Bicycle Spy includes a brief history of WW II, a time line of the war and a brief history of the Tour de France; in other books, I’ve included things like games, recipes and craft projects.

Working on a historical novel is an exacting, and often demanding task. I’ve tried to meet those demands with a combination of the right kind of research and an expansive, kid-centric approach.  And the enthusiastic response to The Bicycle Spy makes me think that I’ve succeeded. 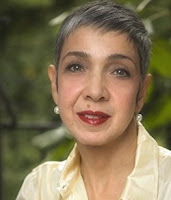 Yona Zeldis McDonough is the award-winning author of twenty-seven books for children and seven novels for adults: THE FOUR TEMPERAMENTS, IN DAHLIA'S WAKE, BREAKING THE BANK (which has been optioned for a film), A WEDDING IN GREAT NECK, TWO OF A KIND, YOU WERE MEANT FOR ME, and THE HOUSE ON PRIMROSE POND.  Her essays, articles, and short fiction have appeared in numerous national and literary publications. She is also the fiction editor of Lilith magazine. McDonough lives in Brooklyn with her husband and their two children. 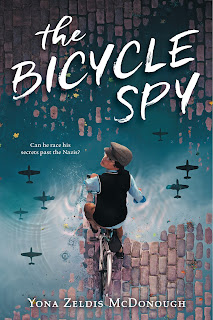 Marcel loves riding his bicycle, whether he's racing through the streets of his small town in France or making bread deliveries for his parents' bakery. He dreams of someday competing in the Tour de France, the greatest bicycle race. But ever since Germany's occupation of France began two years ago, in 1940, the race has been canceled. Now there are soldiers everywhere, interrupting Marcel's rides with checkpoints and questioning. Then Marcel learns two big secrets, and he realizes there are worse things about the war than a canceled race. When he later discovers that his friend's entire family is in imminent danger, Marcel knows he can help -- but it will involve taking a risky bicycle ride to pass along covert information. And when nothing ends up going according to plan, it's up to him to keep pedaling and think quickly... because his friend, her family, and his own future hang in the balance.

Posted by middle grade ninja at 9:35 AM