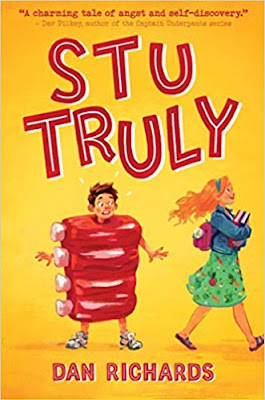 To be honest, I discovered that middle grade students LOVE cringe humor by accident. A fourth-grade teacher introduced me to the term after reading my novel, Stu Truly, to his class. He explained that his students loved the story because Stu, the main character, kept getting into socially awkward, embarrassing situations.

For some reason, kids, and adults, love watching someone else squirm. I know I do. Which is why Stu ends up in so many cringe-worthy situations in my story.

Since the novel’s publication, I’ve been getting asked by kids, teachers, authors, and other handsome folk, how do you write a scene using cringe humor? Good question. That got me to thinking what are the building blocks of cringe humor and how can authors use them to ramp up the laughs in their own stories?Here goes:

#1 What secret is your character afraid of having exposed? Are they scared of spiders? Prone to crying during sad movies? Have a secret crush on a classmate? Embarrassed of their parents’ odd behaviors? It doesn’t have to be something huge (sometimes little secrets are the ones we find most embarrassing) but it does need to either reveal character or advance the overall plot.

#2 Where’s the worst place the secret could be revealed? During a school dance? In the cafeteria? At a sleepover? The more public the better, but keep it within the settings and context of your story.

#3 Now for the tricky part. What is the mechanism that publicly reveals their secret fear? As an example, in my story Stu lies to Becca, the girl he has a crush on, that he is a vegetarian when in fact his father owns a butcher shop and he hates vegetables. His secret gets revealed at the town’s Spring festival parade. How? Stu is forced to wear a rack of ribs costume for a float advertising his father’s butcher shop. Unfortunately, Becca sees him flexing his meaty muscles in front of the whole town. Yikes.

#4 Don’t let the character off easy. Cringe humor is all about watching the character squirm in a relatable way. Stu wearing a meat costume is kinda funny, but the real humor is in him being seen by the girl who thinks he’s a vegetarian. The moment goes from sort of embarrassing (what middle school kid wants to wear a meat costume in public?) to completion humiliation when she shows up at the wrong moment and learns the truth in an undeniable way.

#5 Have your character gain something from the experience. The best cringe humor relays an underlying message to the reader. Stu learned the importance of being himself and telling the truth rather than lying to impress. Perhaps your character learns to laugh at their own mistakes. Or not to take them self so seriously. Or find they have the inner strength to withstand an embarrassing moment. Cringe humor and self-discovery go hand in hand.

At the end of the day, does cringe humor really matter? YES!! Cringe humor is a great way to face our own fears by watching others navigate embarrassing situations. We learn that if they can survive an embarrassing moment, so can we. And when our turn comes, the best way to face a cringe-worthy experience is with a keen sense of humor! Or selective memory loss. Or better yet, both. 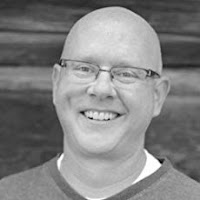 Dan has been writing since he was old enough to hold a pencil.

He is a graduate of the University of Washington Writing For Children Program where he wrote his debut picture book The Problem With NOT Being Scared Of Monsters.

Dan loves telling stories and talking about the craft of writing. School visits make him happy.

He lives with his wife, two kids, and two silly pups in Bothell, WA. 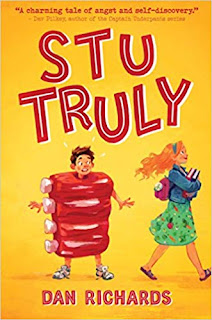 "Let me start by saying I believe in telling the truth. It’s  just that sometimes the truth is complicated."


​
Sixth Grade is hard enough, but when Stu Truly lies to impress his new crush, he finds that keeping up with the charade is a lot harder than he thought.

Stu Truly is a moving and laugh-out-loud story about being yourself by Dan Richards, a talented author making his middle grade debut.
​
"A charming tale of angst and self-discovery."
- Dav Pilkey, author of the Captain Underpants Series
​
"Richards’ first novel utterly charmingly and convincingly depicts a boy’s first crush on a female peer."
- Kirkus Reviews, 2018

Stu Truly by Dan Richards is available now. The follow up, Stu Truly’s First Kiss, will be available spring 2019.

Posted by middle grade ninja at 9:56 AM