Lauren Smulski reveals candid details about her career in NYC publishing, including salary specifics, as she rose from assistant editor to an editor with Harlequin Teen. We discuss her new role as a freelance editor, the types of services she’s offering, and the ways writers should go about evaluating editors. We also chat about the indie publishing revolution, the need for traditional publishing to decentralize, and piñata cakes. Lauren offers many tips for world building, writing dialogue, building emotional depth, and so much more. 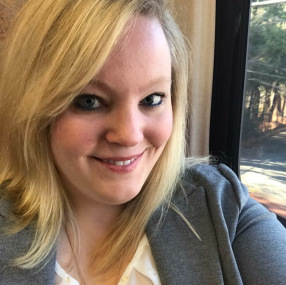 From the moment she learned how to read, Lauren brought books with her everywhere. She flew through story after story while curled up with fuzzy blankets, while lying in hammocks, while at the beach with her toes in the sand, even while her parents scolded her for hiding yet another book under the table at dinner. But it wasn’t until her junior year at Ithaca College, where she studied journalism and English, that Lauren realized making books was an actual job.

After earning her master’s degree in publishing from Pace University, Lauren went on to intern at Dorchester Publishing and freelance for Skyhorse Publishing before landing her first job as an editorial assistant at Harlequin. There, she worked her way up the ladder to become an associate editor for Inkyard Press, specializing in stories for young adults, ranging from epic fantasy, science fiction, and thrillers to contemporary, historical, and nonfiction. Her books have been New York Times bestsellers, Indie Next Picks, award-winners, and received multiple starred reviews.

With nearly a decade of editorial experience under her belt, Lauren has now made the shift into a career as a freelance editor, so she can spend more time working directly with authors to nurture their writing and bring their stories to the next level. She is thrilled to be able to do this from her home in eastern Connecticut, where she lives with her husband, her daughter, and her Shakespearean cat, Tybalt. In her spare time, she loves to invent new cupcake recipes, play lots of board games, and relax by the fire pit in her backyard.

LaurenSmulskiLiterary.com
Posted by middle grade ninja at 8:24 AM