Middle Grade Ninja is available on Soundcloud, Stitcher, itunes, Podbean, Podblaster, RadioPublic, blubrry, Listen Notes, Google Play, and many other fine locations.
Margie Preus and I chat about the path to publishing HEART OF THE SAMURAI and being a Newberry Honor as well as the final book in her ENCHANTMENT LAKE series, THE SILVER BOX. She shares some lessons she learned from legendary writing instructor, John Gardner, and how she overcame the success of her first novel to complete SHADOW ON THE MOUNTAIN. We also talk about writing and producing children’s theater, rules for writing historical fiction, why some triumph over adversity when others are crushed by it, having a separate writing house, meeting Joe Biden, sharing a bed with a ghost, horse breaking, and so much more.

Margi Preus enjoys traveling, speaking, and visiting schools all over the world. Her books for young readers have won multiple awards, including a Newbery Honor, landed on the New York Times bestseller list, been honored as ALA/ALSC Notables, selected as an NPR Backseat Book Club pick, chosen for community reads, and translated into many languages. When not writing, she likes to ski, hike, paddle, or sit quietly with a book in her lap. 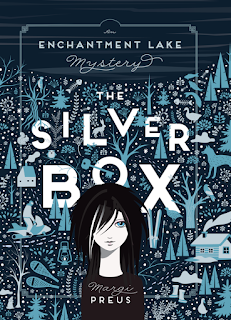 In the final Enchantment Lake mystery, Francie’s search for the truth about her mother—and herself—plunges her into danger during a North Woods winter.

Everything depends on a small, engraved silver box. If only Francie can follow its cryptic clues to the whereabouts of her missing mother she may finally understand the truth about who she really is. But one ominous clue after another reveal that Francie possesses something so rare and so valuable that some people are willing to do anything to get it. When her pursuit leads her into the snowy north woods, It is only to find out that she, herself, is being pursued.


MargiPreus.com
Posted by middle grade ninja at 10:19 AM