Thomas Taylor and I discuss his new novel, MALAMANDER, and writing creepy, atmospheric monster stories for children. We also talk quite a lot about ghosts, flying saucers, and the parts of being a writer that strike us as being a bit magical. And yes, I ask him about designing the UK cover for HARRY POTTER AND THE PHILOSOPHER'S STONE, but we talk far more about how being an artist influences his writing and vice versa. And, as a bonus, we talk about designing comics. 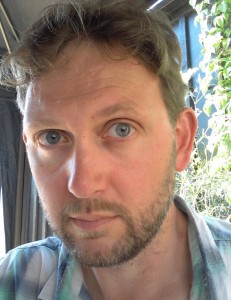 Thomas Taylor is a children's writer and illustrator. He studied at Anglia Ruskin University and attended the Norwich School of Art and Design. Then he spent three years at art school in Cambridge. After finishing his education he found his first job at Heffer’s Children’s Bookshop.

He has written and illustrated several picture books, starting with George and Sophie's Museum Adventure in 1999, and has two novels, Haunters and Dan of the Dead. The first one was published in May, 2012 by The Chicken House and the last one was published on 1 June 2012 by Bloomsbury Publishing PLC. Dan of the Dead sequel named Dan and the Caverns of Bone was issued in June, 2013. The book The Pets You Get with his illustrations won the Stockport Schools’ Book Award in 2013 (early years category) and also the Oldham Brilliant Books Award. He also painted the cover art for the first edition of Harry Potter and the Philosopher's Stone. 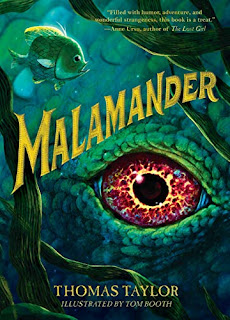 A quirky, creepy fantasy set in Eerie-on-Sea finds a colorful cast of characters in hot pursuit of a sea monster thought to convey a surprising gift.

It’s winter in the town of Eerie-on-Sea, where the mist is thick and the salt spray is rattling the windows of the Grand Nautilus Hotel. Inside, young Herbert Lemon, Lost and Founder for the hotel, has an unexpected visitor. It seems that Violet Parma, a fearless girl around his age, lost her parents at the hotel when she was a baby, and she’s sure that the nervous Herbert is the only person who can help her find them. The trouble is, Violet is being pursued at that moment by a strange hook-handed man. And the town legend of the Malamander — a part-fish, part-human monster whose egg is said to make dreams come true — is rearing its scaly head. As various townspeople, some good-hearted, some nefarious, reveal themselves to be monster hunters on the sly, can Herbert and Violet elude them and discover what happened to Violet’s kin? This lighthearted, fantastical mystery, featuring black-and-white spot illustrations, kicks off a trilogy of fantasies set in the seaside town.

ThomasTaylor-Author.com
Posted by middle grade ninja at 7:46 AM