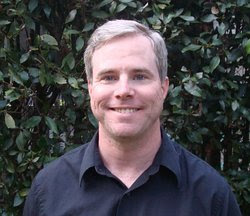 ANDY WEIR was first hired as a programmer for a national laboratory at age fifteen and has been working as a software engineer ever since. He is also a lifelong space nerd and a devoted hobbyist of subjects like relativistic physics, orbital mechanics, and the history of manned spaceflight. The Martian is his first novel.

He was born and raised in California, the only child of an accelerator physicist father and an electrical-engineer mother who divorced when he was eight. Weir grew up reading classic science fiction such as the works of Arthur C. Clarke and Isaac Asimov. At the age of 15, he began working as a computer programmer for Sandia National Laboratories. He studied computer science at UC San Diego, although he did not graduate. He worked as a programmer for several software companies, including AOL, Palm, MobileIron and Blizzard, where he worked on the video game Warcraft II.

I spend most of the day writing, and I work on weekend days, too. Not sure how many actual hours. I’ll guess about 50? I don’t read anywhere near as much as I’d like. It’s pretty much zero these days. It used to be an hour a day.

Originally the book was just a serial I posted a chapter at a time to my website. Once the book was done, people started requesting that I make an e-book version so they didn’t have to read it in a web browser. So I did and posted it to my site. Then other people emailed saying they want to read the e-book, but they aren’t technically savvy and don’t know how to download a file from the internet and put it on their e-reader. They requested I make a Kindle version they could just get through Amazon. So I did that as well. I set the price at Amazon’s minimum allowable price of $0.99. More people bought the book from Amazon than downloaded it for free from my website. Amazon has a truly amazing reach into the readership market.

The book sold very well and made its way up various top-seller lists on Amazon. That got the attention of Julian Pavia at Crown. He told his colleague David Fugate (a literary agent) about it. David ended up becoming my agent and Julian offered me a book deal. It was a whirlwind of activity because 20th Century Fox optioned the movie rights that same week.

I think anyone can become a writer. It’s like anything else: You do it long enough and you start to get good at it. In my case, I just kept writing stuff.

My favorite thing: Knowing that people are reading my stories and enjoying them.

1) You have to actually write. Daydreaming about the book you’re going to write someday isn’t writing. It’s daydreaming. Open your word processor and start writing.

2) Resist the urge to tell friends and family your story. I know it’s hard because you want to talk about it and they’re (sometimes) interested in hearing about it. But it satisfies your need for an audience, which diminishes your motivation to actually write it. Make a rule: The only way for anyone to ever hear about your stories is to read them.


3) This is the best time in history to self-publish. There’s no old-boy network between you and your readers. You can self-publish an ebook to major distributors (Amazon, Barnes and Noble, etc.) without any financial risk on your part.

Isaac Asimov. Just to experience how his mind works.