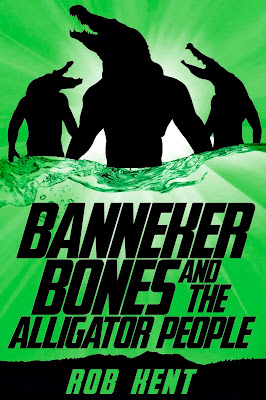 This post isn't a review or an interview or even an afterword (coming soon).

This is a post with the sole purpose of letting you that Banneker Bones and the Alligator People is now available for you to purchase here. (note: the paperback will become available later in the day in some regions)

If you haven't read the first book in the series, Banneker Bones and the Giant Robot Bees is available to purchase here (the ebook is free to download).

What's that you say, Esteemed Reader? You want to hear me read the book to you? No, I'm not goin—okay, fine, but just three chapters. You can hear me read my book in the links below.

And now, so you won't feel like you wasted your click, here's some information about the book:

Eleven-year-old cousins Banneker Bones and Ellicott Skullworth are back in their second adventure. Picking up where Banneker Bones and the Giant Robot Bees left off, our heroes are soaring through the air on jetpacks, as they do, when they spot a half man, half alligator that’s all terrifying. Naturally, they follow the alligator person deep into the sewers and are nearly eaten for their trouble.

Worse, no one believes the boys were attacked. Not the kids at school, not their parents, not even Banneker’s faithful robot butler. Banneker and Ellicott must prove the existence of alligator people to both vindicate themselves and once again save Latimer City from certain destruction.

For as Banneker warns TV reporter Chip Lieberman, "I don't want to alarm your viewers, Chip, but we may all die. This is the start of the alligator people apocalypse!"

Banneker Bones and the Alligator People is a humorous, science fiction adventure for readers of all ages written in the spirit of a comic book.

It was dark, so Ellicott saw more of a shadow outline than an actual figure, but he saw enough. The creature had two thick legs and two arms, lean with leathery muscle like a dinosaur’s arms. He too was the size of a large man, but there was nothing human about his face.
He raised his hideous head and opened his mouth wide, wider than any person ever could. In that long crack Ellicott glimpsed the jagged points of sharp teeth. The creature snarled and shook his snout.
Something thick and scaly rose behind the creature’s back and whipped to the right, smashing another pane of glass the size of a four-story house.
“He has a tail,” Banneker said, a grin spreading across his face. “Cool.”
The first two security robots rolled into the street, each the same height as the creature. Their eyes lit up flashing red as they spoke. “Attention citizen, you’re vandalizing private property.”
The creature roared, deep and guttural, and twitched his muscular tail. Now Ellicott could see he was dark green and looked more like an alligator walking upright than a dinosaur. The alligator person rounded on the robots, preparing for a fight.
“This is going to be awesome!” Banneker cried.
Ellicott groaned. “Why didn’t I stay in bed?”