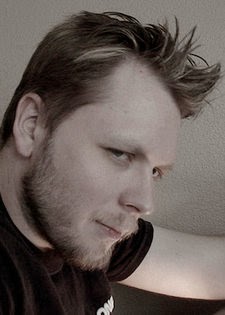 Steven Novak is the author of the Breadcrumbs For The Nasties series of novels, Forts, Goats Eat Cans, numerous children's books, and a number of comics. He is an accomplished illustrator and has designed book covers for authors across the globe. He lives with his wife in southern California, has two cats, and apparently likes to stare at the sky dramatically in black and white photos. His work can be found online at www.novakillustration.com

Born in Chicago, Illinois, Steven Novak has been writing, drawing, and creating stuff pretty much from the start.

Seriously, the guy has spent nearly his entire life hunched over a pad of paper with a pencil in his hand.

His spine is mostly crumpled.

After four years at the Columbus College of Art and Design in Columbus, Ohio, Steven headed to southern California. It was there that he married his wife, Tami, and began his professional career.

Steven is also a cover designer for hire and I highly reccomend him as he's designed the covers for all of my books to date.

Click here to read my review of Forts: Fathers and Sons.

That’s tough. I don’t know. It’s hard thing to nail down. I still love The Martian Chronicles. I’m not even sure it’s Ray Bradbury’s “best” book, but it’s the first I fell in love with, and the one I always come back to. I read Fight Club when I was in high school and it blew my mind. As a lifelong comic book fan I’d hate myself if I didn’t mention Watchmen. Cat’s Cradle was a revelation back in the day. Then there’s Maus. Anything by John Swartzwelder is usually good for a laugh. The first book I ever loved was Harold And The Purple Crayon. Does that count?

I write in spurts. When I’m really into the process I can bang out a book in a couple weeks. When I’m not, I’m lucky to crank out three or four words in a couple months.

Scratch that, I’m fairly certain I hate it.

It’s a pain in the butt. Once I have the story worked out in my head, I’m mostly done with it. The act of transforming that story into a book feels like slogging through waist-deep mud in concrete boots. It’s annoying. And pointless.

Why did I waste my money on those things?

I was working as a freelance product designer for a company in Palm Springs a few years back. All of a sudden they no longer required my services. I was out of work, and the economy was garbage, and I’d grown so comfortable in the position that I hadn’t taken the time to secure much of a client list.

I was young. And a little dumb.

I ended up cleaning the bathrooms at the local Best Buy during the week, twirling signs on the weekend, and delivering packages during the holidays. It was a strain on my marriage and did very little for my already low self-esteem. While it put some cash in my pocket, it wasn’t exactly the most creatively fulfilling line of work.

In order to stay sane I started writing the Forts series. I love those books. They’re the most personal things I’ve ever written. Technically they’re a mess, but who cares? I didn’t write them to sell them. That part just sort of happened. They helped me come to terms with some nasty parts of my past, and my father, and refocus on the most important things in my life.

Lemons into lemonade, and other hackneyed expressions.

Creative people are probably born creative. The act of writing is mostly taught. I don’t necessarily think all writers are artists. Writing is sometimes a job. Like any job it can be repetitive, and silly, and not very creative, and honestly, sort of dumb.

My favorite thing about writing is coming up with the idea. I don’t keep notes. I don’t plan, or storyboard, or do anything a good writer should probably do. If it’s not good enough to remember, it probably wasn’t that good to begin with.

I can admit that.

My least favorite thing about writing is actually writing. I understand how stupid that sounds. I really do.

Don’t listen to anything I say? Ignore me entirely and write a romance novel about vampires? I dunno.

I’m the wrong person to ask for advice. I’m a bit of a weirdo, and not “successful” enough for the masses to take notice. I own two pairs of pants and wear the same four shirts in rotation. I rarely shave. I’m the king of the introverts, standoffish in public and a goofball at home. I’m a grump and I like being a grump.

If your ball lands on my lawn, I’m keeping it!

I suppose the best advice I can offer is to write because you love to write. That’s it. Don’t plan on getting rich, because so few do. Even the writers who are actually selling books aren’t “rich.” They’re paying their bills, and feeding their families, and that’s great, and it’s a heck of a lot better than digging used tampons out of those little metal boxes in women’s restroom.

Trust me on this.

No matter what you pursue in life, make sure you love it. Life’s too short to waste it doing something you hate.

Also, never root for the home team. Be different. Same is boring, and in the long run same is always forgotten.

That dude’s gotta be wonderfully weird, right? It would make for an interesting lunch. What would he eat? His old-timey money would be useless so I’d probably have to pay. He’s a little guy though. Probably wouldn’t eat much. So that’s a plus. We could complain about stuff together.

I’d show him a video on my cell phone and watch his head explode.

Posted by middle grade ninja at 8:30 AM