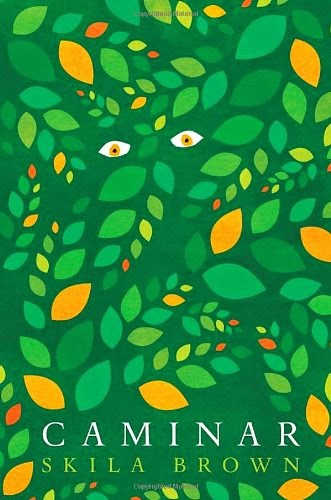 Our mountain stood tall,
like the finger that points.

Our corn plants grew in fields,
thick and wide as a thumb.

Our village sat in the folded-between,
in that spot where you pinch something sacred,

to keep it still.

Our Mountain stood guard at our backs.
We slept at night in its bed.

Do you like poetry, Esteemed Reader? April is national poetry month, so it's the best time for us to discuss Skila Brown's Caminar, which is a middle grade novel written in verse. I'm going to be honest with you, I'm out of my element this week. I've read plenty of poetry over the years and I've even written some. Here's an old Robert Kent original you won't find anywhere else because I don't think anyone would pay money for it:

So that's pretty much the height of my poetic prowess:) I think we can agree I'm woefully under qualified to discuss serious poetry, The thought of writing critically about a book like Caminar intimidates me the way reading Shakespeare intimidated me as a teenager, but later I played Nick Bottom in a version of A Midsummer Nights' Dream and wasn't booed off the stage (I even understood most of my lines). I suppose I'll roll up my sleeves and give this a go as well.

I've read Caminar twice now. It is haunting and beautiful and will get you right in the feels.  One advantage of a free verse novel is it can be read quickly, even by middle grade standards, so I was able to read it once for comprehension, and once for appreciation. Part of me is excited to see a subject as serious as this can be presented in a middle grade book, and the other part hates to label Caminar as middle grade lest some readers view it as just a book for kids. This is a book of serious weight and magnitude to be appreciated by readers of all ages.

And like the best fiction, Caminar has a hook. For me, the hook was meeting Skila Brown at a conference last month and sitting in on a couple sessions of hers. I was so impressed by the author, I wanted to read her book. For the reader, I suspect the hook will be not the first poem above, although it does go a long way toward assuring the reader they are in the hands of a capable artist and are about to enjoy a story that will be richly told. For the reader who hasn't met the author, I think the hook lies with the Note to the Reader preceding the first poem:

In 1954, the democratically elected government of Guatemala was overthrown by a group of military men who were unhappy with the way the government had been passing laws to help poor farmers in rural communities. Forty horrible years followed, in which the people of Guatemala tried to resist, organize, and bring about change, all while the Guatemalan army did everything they could to discourage the "rebels" or "guerillas," as they called the organizers. The army went into the mountains of rural Guatemala, where they tried to prevent villagers from joining the rebels.

Many lives were lost. And many more were never the same.

And that is to be the background of a novel perfectly acceptable to read to children. It's not a cartoon movie with a happy-meal tie-in. When I was in film school, I had a wacky professor who told me that if modern American story culture were a meal, it would be mostly desert, barely any meat and almost no vegetables. My response: I like desert and it sure seems to be popular. Now as an author, I'm serving up zombies and robot bees, but I try to remember to include some depth and meaning in my fiction so my readers don't get mental cavities.

Caminar is meat and vegetables. It is rich and nutritious and the sort of reading experience a young mind needs to grow strong. And there's some desert: the pleasure of fine language composed artfully is a desert that refines taste. And now I'm going to drop the metaphor before I start talking about how a good book review is an antacid:)

Caminar is the story of Carlos, although really, it's the story of what happens to Carlos' village, Chopan, when an army invades with the intent of eventual genocide, as told from the perspective of a young boy.  It's a coming of age story and it's a historical narrative and it's a work of art. The violence is never graphic and Brown is smart enough to keep much of the horror "off-screen," while still telling the truth about what happened. I'm terrified of reproducing passages as spacing is crucial and I'll sure I'll muck it up, but here's a good example:


Why I Dropped the Mushrooms

on a saint's day—
fireworks—


In fact, spacing is crucial to most of the poems, which is perhaps the reason Caminar isn't currently available as an ebook. Sometimes the reason for spacing is obvious such as:

"I was your age when I stepped away
from Child,      stepped into Man."


In other poems, the spacing helps to form an image, such as is the case in my favorite poem, listed below. Another poem, called Smoke, features short lines spaced back and forth across the page to evoke the image of rising smoke. I was so inspired I reformed my highly literary poem Chomp, Chomp into old school Pac-Man, or tried to:)

At other times, the spacing is less obvious and left to the reader to determine the reasoning behind it. And that is the pleasure of Caminar: the language that's used and the way it's used. Brown sets up multiple lines early in the book to be called back to later, rewarding the reader for paying attention. Even if you don't write poetry, the skills on display here are applicable to all fiction writing and worth paying attention to whatever you write.

Caminar is a good story, well told, and it will haunt you. I'm so glad I got to meet Silka Brown and enjoy her novel as both experiences have made a lasting impression on me. Typically, I end each review with four or five of my favorite passages from the text, but this isn't your typical book so I'll leave you with a favorite poem instead:

I looked, pointed
my eyes toward the village, toward
Chopan. Looked through
trees to see. Something
moved. Something
fell. A limb.

And then—the sky
was filled
with blue,            butterflies,
tiny blues
that fluttered and flew,
past my tree,
over my head, above
the forest,
into the sky.
I blinked
and saw
the last one
was yellow.

STANDARD DISCLAIMER: All reviews here will be written to highlight a book’s positive qualities. It is my policy that if I don’t have something nice to say online, I won’t say anything at all (usually). I’ll leave you to discover the negative qualities of each week’s book on your own.
Posted by middle grade ninja at 12:45 PM