Two-time Newberry Award winner and one of my childhood heroes, Katherine Patterson, and I discuss how she transformed from a “mediocre writer” to a Living Legend (so designated by the Library of Congress in 2000). We chat about her newest novel, BIRDIE’S BARGAIN, how Hollywood demanded a sequel to BRIDGE TO TERABETHIA, the time she kissed Robert Patrick, the importance of maintaining the feeling of childhood injustice, writing sparse descriptions, the mysteries of inspiration, the influence of THE YEARLING, the nature of God, and so, so much more, and we have a whole lot of fun doing it. 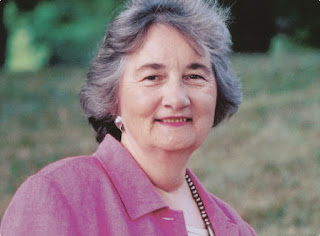 Katherine Paterson is the author of more than 30 books, including 17 novels for children and young people. She has won the Newbery Medal twice, for Bridge to Terabithia in 1978 and Jacob Have I Loved in 1981. Her book The Master Puppeteer won the National Book Award in 1977; The Great Gilly Hopkins won the National Book Award in 1979 and was also a Newbery Honor Book. For the body of her work she received the Hans Christian Anderson Medal in 1998, the Astrid Lindgren Memorial Award in 2006, the NSK Neustadt Award in 2007, the Laura Ingalls Wilder Award (Children's Literature Legacy Award) in 2013, and the E. B. White Award in 2019. In 2000 she was named a Living Legend by the Library of Congress. Paterson is a vice-president of the National Children's Book and Literary Alliance and is a member of the board of trustees for Vermont College of Fine Arts. She lives in Montpelier, Vermont with her dog, Pixie. 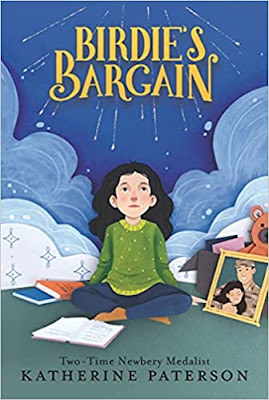 In a poignant and unflinching new realistic novel from the Newbery Medal–winning author of Bridge to Terabithia, a ten-year-old girl makes a deal with God for her father's safe return from the Iraq War.Birdie has questions for God. For starters, why couldn’t God roll history back to September 10, 2001, and fix things—so the next day was an ordinary sunny day and not the devastating lead-in to two wars? Daddy has already been to Iraq twice. Now he’s going again, and Birdie is sure he’ll die. At the very least, she won’t see him again for a year, and everything will not be OK. (Why do grown-ups lie?) To save money, she, Mom, and baby Billy have moved to Gran’s, where shy Birdie must attend a new school, and no one but bossy Alicia Marie Suggs welcomes her. Doesn’t God remember how hard it was for Birdie to make friends at Bible Camp? Counselor Ron taught about Judgment there—and the right way to believe. Has Birdie been praying wrong? Why else would God break their bargain? Readers of all faiths and backgrounds, especially children of military families, will identify with and root for the unforgettable Birdie, given inimitable voice by a master storyteller.
KatherinePaterson.com
Posted by middle grade ninja at 8:07 AM