Hugh Howey returns to the show, proving reality is a simulation. We talk about his upcoming picture book CANNIBAL HAIKU as well as the WOOL and BEACON 23 television adaptations and his experiences in writers’ rooms, and touring the sets. He drops tantalizing hints about some other upcoming projects for film and television as well as his new novel, ACROSS THE SAND, and a new WOOL trilogy!!! I ask several specific craft questions about some of my favorite stories of his and we get a bit philosophical, discussing mortality, the impact of peer pressure, theories of mind, victims of belief systems, our thoughts on God, AVATAR, the nastiness of ants, and so much more.
Don't miss my first conversation with Hugh in episode 75
Make sure you read Hugh's original 7 Question interview.

And his second (he's the only person in the history of the site to face 14 questions).

Hugh Howey is the author of the award-winning MOLLY FYDE saga, the horror classic I, ZOMBIE, and the New York Times and USA Today bestselling WOOL series. The WOOL OMNIBUS won Kindle Book Review's 2012 Indie Book of the Year Award -- it has been as high as #1 on Amazon -- and 40 countries have picked up the work for translation. Television and film versions of WOOL, SAND, and BEACON 23 are all in development. 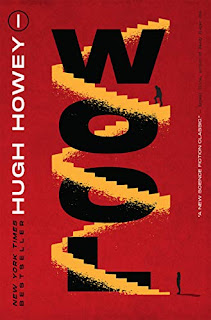 “One of dystopian fiction’s masterpieces alongside the likes of 1984 and Brave New World."—Daily Express The first book in the acclaimed, New York Times best-selling trilogy, Wool is the story of mankind clawing for survival. The world outside has grown toxic, the view of it limited, talk of it forbidden. The remnants of humanity live underground in a single silo. But there are always those who hope, who dream. These are the dangerous people, the residents who infect others with their optimism. Their punishment is simple. They are given the very thing they want: They are allowed to go outside. After the previous sheriff leaves the silo in a terrifying ritual, Juliette, a mechanic from the down deep, is suddenly and inexplicably promoted to the head of law enforcement. With newfound power and with little regard for the customs she is supposed to abide, Juliette uncovers hints of a sinister conspiracy. Tugging this thread may uncover the truth ... or it could kill every last human alive. “Claustrophobic and, at times, genuinely terrifying.”—Washington Post
HughHowey.com
Posted by middle grade ninja at 9:22 AM