Book Review: THE OBSIDIAN PEBBLE by Rhys A. Jones 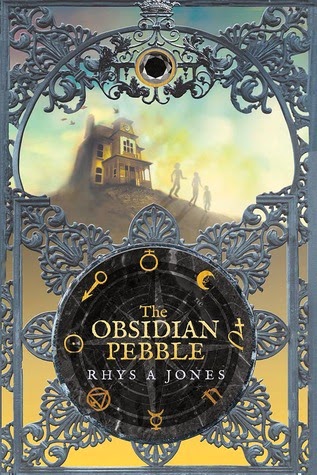 First Paragraph(s): Oz Chambers sat in his bedroom, desperately trying to concentrate on his algebra homework and ignore the tempting bottle of blood on his desk. He dragged his eyes away from the crimson phial and struggled with two maths questions, before trying to get to grips with the essay on “Sir Gawain and the Green Knight” he’d been dabbling with all week. He liked English, and especially reading, but that didn’t make the essay any easier.
Oz sighed heavily. It was no good. Today was proving to be a particularly hopeless homework day because he just couldn’t settle. He was simply too excited by the prospect of what was in store that evening.

Hi there, Esteemed Reader! Happy Thanksgiving! The Obsidian Pebble is to be my last Book of the Week of 2013 and it's a great one to go out on.

It all begins with teen Oz Chambers, who's inherited his very own mansion:

“I wish I had a long-lost uncle who would leave me something in his will. Wouldn’t it be great if it’s your sixteenth birthday and a crusty old lawyer bloke turns up with a crinkly yellow envelope full of stocks and bonds and stuff worth zillions?” Ruff was looking at the ceiling, but his eyes were seeing something else altogether.
Oz didn’t really know what stocks and bonds were and neither, he suspected, did Ruff. But they sounded really impressive.
“As if that would ever happen to anyone,” Ellie tutted.
Ruff threw her a baleful, sulky look. “It sort of happened to Oz, didn’t it? His dad, anyway.”
“Yeah, well, getting something like this dropped in your lap isn’t exactly like winning the lottery, you know,” Oz said, not wanting to let Ruff and Ellie argue. “It costs loads to run and takes ages to clean. And even the draughts have draughts.”

The bad news is the mansion is haunted:

“And anyway, the place is a legend. It was even in Hidden Haunted Houses of Great Britain.”
“I didn’t know that,” Oz said.
“Ye-ah, it was in the reference section in Waterstone’s the other day. It said something like… ‘an old orphanage on Magnus Street in Seabourne now occupies the site of the Bunthorpe Encounter. One of the most famous supernatural occurrences in the country.’”
“Cool,” Oz said, pleased. “I’ll Google it later.”
“Looks more real in a book, though, somehow, don’t you think?” Ellie said.
Oz knew what she meant. He made a mental note to look it up next time he was in the bookshop.

Incidentally, I have to chuckle at that last sentiment. I'm sure there are some children in the world who prefer reference books to Google, but not many. I made a crack in my last post about printed books being horse-drawn buggies in comparison to ebooks, which are like automobiles. Rhys A. Jones commented in favor of print books, and though I agree they're lovely, hoping future readers will put up with them when they have ebooks is akin to hoping children will rely on printed references when they have Google. It's a nice thought, but not likely:)

The real fun begins when Oz finds a package addressed to him, posted the day before his father's death. Obviously, a package like that must contain something of importance, and this one contains the obsidian pebble. I won't spoil the secrets this tale holds, but the pebble has powers most curious which lead Oz into a wonderful adventure you're going to enjoy.

My what a lot of dead parents there are in middle grade fiction:) Last review, we discussed the death of the protagonist's mother in Killer Species #1. In The Obsidian Pebble, it's dad's turn, and Jones does a nice job of showing us Oz's emotions and allowing us to feel his loss. But what I really liked was the way dad's death impacts Oz's relationship with his mother. I felt like mom's reaction to the death of her husband was realistic and adds another layer to Oz's grief:

Depression. Reactive unipolar.
The second bit didn’t sound too bad when he read it back. In fact, it didn’t sound like an illness at all. Unipolar sounded more like something you might use to repair a broken radio. But there was nothing easily fixable about the way his mother wouldn’t eat, or didn’t want to be hugged, or didn’t shower, or slouched about in a dressing gown for days at a time. There was nothing he could buy from an electrical shop to stop her crying for hours on end.

In fact, I liked all of the adult characters in The Obsidian Pebble, particularly Oz's instructor, Boggs. I wish this speech was mandatory reading for children everywhere and it may be my favorite passage from the book:

Boggs turned in disgust and marched to the front of the class. When he reached the blackboard he pivoted to face the whole of 1C, wearing a sour-faced scowl.
“I’ve seen it all before. Cocky little first years who think they know it all, so sure that you’re all going to change the world.” Boggs shook his head and his face sneered into a nasty imitation of a smile. “Well, let me tell you something, my naïve little friends. The real world isn’t about talent shows and people making idiots of themselves on TV for thirty seconds of fame. None of you are going to wake up with magical powers that will get you all the things you want. Life is not a fantasy film. The truth is that, from now on, it’s a hard slog because bills don’t pay themselves. In just a few short years, you, like everyone else, will have to sell your souls to the banks to borrow money to get a mortgage to buy a house. And that means getting up early and going to work every day even when the weather’s perfect and all you really want to do is go to the beach or toboggan on Marsden Hill.”
Boggs’ face had gone blotchy purple, and little flecks of spit had begun to froth at the corners of his mouth, but he wasn’t finished yet. “I’ve got two years left of my thirty years of commitment to this profession. Murderers get less than I have served here. So, I have no interest whatsoever in soft-soaping you lot, and that means that I will not put up with any nonsense from any of you.”

Not to worry, Esteemed Reader. I have more favorite passages for you. And as we've reached the end of the review, it's a good time to break them out. If you're looking for an enjoyable fantasy with heart, don't miss The Obsidian Pebble.

As always, I'll leave you with some of my favorite passages from The Obsidian Pebble:

They crossed a passageway to another door, which opened out into a large, shabby-looking entrance hall with a massive double staircase leading up to the floor above. The place smelled musty and unused and their voices echoed into the chilly emptiness when they spoke.

There was no sound at all in the atrium as midnight approached, but outside the wind moaned as it gusted around the stone walls and beams creaked as the old place resisted the elements. Oz finished adjusting his watch and reached down to pick up the bottle when a noise made him start. Footsteps. Oz looked up suddenly. Maybe Ellie wanted something else from the kitchen. More likely it would be Ruff. But there was no one there. He started to climb the stairs again. Must have been his imag… Oz stopped and stood stock-still. Soft and deliberate and sounding very near, the footsteps came again.

She was a small, thin girl with elfin features, short dark hair and a constantly intense expression. Her clothes were shapeless and fashionably drab and she’d gone for “backwards through a hedge” as a hairstyle, with great success.

Whoever had thought up algebra should have been hung in a gibbet, like they did to people in Sir Gawain’s time.

Oz was always struck at how devoid of colour Boggs was. It was as if he’d decided to live his life in monochrome. His moustache was grey-flecked, his hair (what little he had of it) was silvering, and he even had a constant smattering of grey-cigarette ash on the lapels of his charcoal herringbone jacket. His eyebrows were the only feature in an otherwise sour-looking face that gave any hint of original colouring in that they were dark and bushy

Posted by middle grade ninja at 10:48 AM