Zetta Ellicott and I chat about her bestselling middle grade series, DRAGONS IN A BAG, and lessons learned writing more than 40 books for children (so far). We talk about how she envisions her success with a vision board and how she trains in puppetry, film, and other art forms to ensure she’s using all the parts of her brain. We discuss the importance of mirror books, how she learned to decentralize whiteness and decolonize her imagination, how she uses rage as fuel while remaining hopeful, why she’s going to Virginia where a book of hers has been banned, a mysterious ghost in a top hat, a possible flying saucer sighting, and so much more. 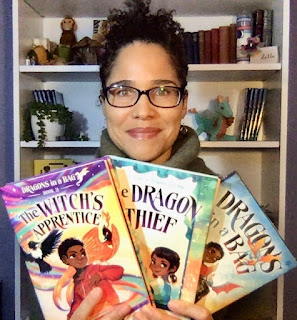 Zetta Elliott is a Black feminist writer of poetry, plays, essays, novels, and stories for children. She was born and raised in Canada, but has lived in the US for over 25 years. She earned her PhD in American Studies from NYU in 2003; she has taught at Ohio University, Louisiana State University, Mount Holyoke College, Hunter College, Bard High School Early College, and Borough of Manhattan Community College. Her poetry has been published in New Daughters of Africa, We Rise, We Resist, We Raise Our Voices, the Cave Canem anthology The Ringing Ear: Black Poets Lean South, Check the Rhyme: an Anthology of Female Poets and Emcees, and Coloring Book: an Eclectic Anthology of Fiction and Poetry by Multicultural Writers. Her novella, Plastique, was excerpted in T Dot Griots: an Anthology of Toronto’s Black Storytellers, and her plays have been staged in New York, Cleveland, and Chicago. Her essays have appeared in School Library Journal, The Huffington Post, and Publishers Weekly. Her picture book, Bird, won the Honor Award in Lee & Low Books’ New Voices Contest and the Paterson Prize for Books for Young Readers. Her young adult novel, A Wish After Midnight, has been called “a revelation…vivid, violent and impressive history.” Ship of Souls was published in February 2012; it was named a Booklist Top Ten Sci-fi/Fantasy Title for Youth and was a finalist for the Phillis Wheatley Book Award. Her YA novel, The Door at the Crossroads, was a finalist in the Speculative Fiction category of the 2017 Cybils Awards, and her picture book, Melena’s Jubilee, won a 2017 Skipping Stones Honor Award. She received the Children’s Literature Association’s Article Award for her 2014 essay, “The Trouble with Magic: Conjuring the Past in New York City Parks.” She is an advocate for greater diversity and equity in publishing, and has self-published numerous illustrated books for younger readers under her own imprint, Rosetta Press; 3 were named Best of the Year by the Bank Street Center for Children’s Literature, and Benny Doesn’t Like to Be Hugged was a first-grade fiction selection for the 2019 Scripps National Spelling Bee. Dragons in a Bag, a middle grade fantasy novel, was published by Random House in 2018; the Association for Library Service to Children (ALSC) named it a Notable Children’s Book. Its sequel, The Dragon Thief, was named a Best Middle Grade Book of 2019 by CBC Books. Say Her Name, a young adult poetry collection, was published by Little, Brown Books for Young Readers in January 2020; A Place Inside of Me was published in July 2020 by FSG and was named a Notable Poetry Book by NCTE. She currently lives in Evanston, IL. 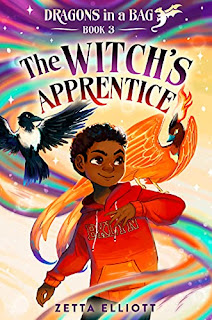 The dragons may be out of the bag, but Jaxon is ready to hatch some magic of his own in this third book in the critically acclaimed series.Ever since the baby dragons were returned to the magical realm, things have been off. The New York summer has been unusually cold. A strange sleeping sickness is spreading across the city. And Jaxon’s friends Kenny and Kavita have begun to change, becoming more like the fairy and dragon they once cared for. On top of all that, Jax is hiding a secret—Vik entrusted him with a phoenix egg! Jax wants to help his friends and learn how to hatch the phoenix, but so far his lessons as a witch’s apprentice haven’t seemed very useful. Where can he find the strength—and the magic—he needs?

Posted by middle grade ninja at 10:11 AM

Email ThisBlogThis!Share to TwitterShare to FacebookShare to Pinterest
Labels: A Place Inside of Me, Dragons in a Bag, Interview, Middle Grade, Podcast, Say Her Name, The Dragon Thief, Zetta Elliott