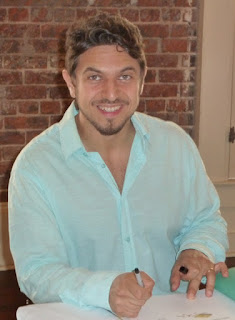 Award-winning children's author and illustrator David Ezra Stein was born in Brooklyn, NY. By the time he was three, he was asking adults, "Wanna come to my room? Read books?" This love of reading grew into a love of telling stories, and then, writing.

David Ezra Stein’s Interrupting Chicken was awarded a 2011 Caldecott Honor, as well as many state awards. His picture book Leaves won the Ezra Jack Keats award and was a Publishers Weekly Best Book of the Year, a Kirkus Reviews Editor’s Choice, and a School Library Journal Best Book. Booklist called his book Monster Hug! “a cousin to Maurice Sendak’s Where the Wild Things Are.” Pouch! (Putnam), was a 2010 Charlotte Zolotow Honor Book. His books have been translated into Chinese, Korean, Japanese, Spanish, French, and Finnish.

Top-of-the-head three: Lord of the Rings (counting as one work), The Mouse and the Motorcycle, Watership Down.

Wow, that doesn't seem like a whole lot. Well, I am busy building an art and writing studio, so once that's finished I'll have more time to actually write.

I always wrote for myself, but never dreamt of doing as a living till college. I went to art school and majored in illustration, which is basically storytelling with images. In senior year I took a children's book elective, with author/illustrator Pat Cummings as my teacher. I rediscovered my childhood love for the picture book, and decided to try to be a children's book writer and illustrator.

As a matter of fact, I nearly sold a book while in college, but eventually the publisher let on that they wanted someone else to illustrate, so I turned the deal down.
After graduation, I read about writing picture books, and I went to see quite a few editors here in NY.
I would sit at the dining room table every day, and write stories and draw pictures. I call it my "grad school."  Four years later, I sold a book—Cowboy Ned & Andy—to Simon & Schuster.

Writers are basically readers, and story lovers. When I was little, a lot of people told me stories and read to me. I began to make up my own stories, in imitation of the ones I was surrounded with. In my quest to become better at writing, I have kept my ear out for every kind of writing around me: television, songs, movies, operas, plays, advertising, cereal boxes, comics, etc., etc.

Writing is an act of discovery for me. Trying something new each time can be totally exciting, and terrifying. You can't force an idea to be something it's not. You can only walk with it and get to know it well. That is the upside and downside of the profession.

Don't judge your own work while you are busy making it. Just get it down. That is the work of writing or painting.

Preferably a living one, since a dead one would make me lose my appetite. I would have lunch with Richard Adams, on a hillside in the setting of Watership Down. Grass waving, rabbits peering out here and there. Or maybe I would have tinned sardines and cold chicken for lunch with Kenneth Grahame, on the river with Rat and Mole. Or cucumber sandwiches with P. G. Wodehouse at some country estate. Aw, well, can't pick just one. (Maybe lemonade and chocolate chip cookies with James Marshall...)

www.davidezra.com
Posted by middle grade ninja at 8:23 AM