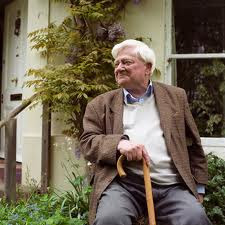 Richard Adams was born in Berkshire in 1920 and studied history at Bradfield and Worcester College, Oxford. He served in the Second World War and in 1948 joined the Civil Service. In the mid-sixties he completed his first novel, Watership Down

, the story of which he originally told to his children to while away a long car journey. Watership Down

was awarded both the Carnegie Medal and the Guardian award for children's fiction for 1972.

Click here to read my review of Watership Down.

In 1974 Richard Adams retired from the Civil Service to devote himself to writing, and in that year he published Shardik

, his second novel. His subsequent novels are The Plague Dogs

(1988), and his other books include The Iron Wolf and Other Stories

and, in collaboration with Ronald Lockley, Voyage through the Antarctic

. He also collaborated on Nature through the Seasons

and Nature Day and Night

(with Max Hooper and David A. Goddard). He wrote the poetry for The Tyger Voyage

, illustrated by Nicola Bayley, and The Ship's Cat

. He has also written a volume of autobiography, The Day Gone By.

Richard Adams lives in the south of England with his wife Elizabeth, who is an expert on English ceramic history, and has two grown-up daughters, Juliet and Rosamond. His enthusiasms are English literature, music, chess, beer and shove-ha'penny, bird-song, folk-song and country walking.

I think “The Bible” must come top of any list. “The Bible” is not of course “a book” but an amalgamation of something like 36 books with many different authors and a very wide subject matter. However, if the bible is accepted as number 1, my second book would be the works of Shakespeare. It is scarcely necessary to say why. My third book is really a piece of self-indulgence. When I was about 10 years old, I came across, in the school library, a book by Walter de la Mare called “The Three Mulla-Mulgars”. This is a fantasy by one of our better English poets which I consider to be possibly the best fantasy in English literature. This is a “journey” novel, the story being about three highly intelligent and half civilised apes, who make a long and dangerous journey to a promised land, a kind of paradise and the origin of their father, Seelem. It is an extraordinarily inventive work – the product of a wonderful imagination. I have read the book many times and do not know any fantasy in English which I would rate more highly.

The amount of time I spend writing varies a very great deal. When I am writing a book I am usually completely engrossed and may spend 35 hours a week or even longer. As for reading, I am continually reading and this might come out as an average of 25 to 30 hours a week.

This was the first story which I managed to get published. I had told the story orally to my little girls and they pressed me to write it down. When I had done this they pressed me to find a publisher. At that time I believed that the story might perhaps merit a modest publication – a few thousand copies in hardback. The title is “Watership Down”. This was rejected by four publishers and three authors’ agents. However, I persevered and my eighth submission was to a very small, one-man publisher named Rex Collings. He accepted the book immediately and it went on, with his assistance, to become a rather overwhelming European and American bestseller. Since then I have published a great many books – some fiction and others of a versatile nature. So to this question I must answer “The path that led me to publication was my first novel “Watership Down”.

This question is expressed in such wide terms that it is not really possible to give a precise answer. However, I very much doubt that anyone who has become a writer can be said to have been “born”. People become writers under all sorts of influences – their teachers, their friends, their own reading of other writers. I am tempted to quote the saying of the poet W.H. Auden “Art, if it doesn’t start there, always ends, whether aesthetics like the thought or not, in a desire to entertain our friends.” What started me off as a writer was making into a written story a tale which I made up and told orally to my children. I think most authors become writers because they have admired the works of others and want to join the happy band.

The favourite thing, beyond a doubt, is receiving, for the first time, the finished product. There is no pleasure like receiving, from the publisher, your own finished work. The least favourite thing is the actual business of writing, which is unpleasantly hard work.

I don’t think it’s necessary to have lunch; just to talk. I would very much like to talk to the authors of the four Gospels. Next to that must come Shakespeare but to talk to Homer (if he ever existed) would be wonderful and to that I would add Virgil and Goethe.