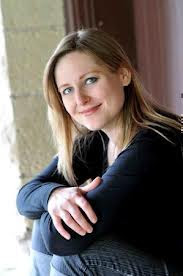 Jacqueline West is the author of the award-winning middle grade series The Books of Elsewhere. The Books of Elsewhere, Volume One: The Shadows (2010) garnered starred reviews, several state award nominations, and a spot on the New York Times Bestsellers List. The series is published by Dial Books for Young Readers (a division of Penguin Random House) in the USA and will also be published in Italy, Spain, Greece, Turkey, Indonesia, Sweden, Norway, France, Germany, and Catalan.

Jacqueline's short fiction for adults and children has appeared in a variety of publications, and her poetry has received many honors, including two Pushcart nominations, a Rhysling Award nomination, and a Dorothy Sargent Rosenberg prize. Cherma, her series of poems about Wisconsin's Bohemian immigrants, was published in March 2010 by the University of Wisconsin's Parallel Press chapbook series.

Click here to read my review of The Books of Elsewhere, Volume One: The Shadows.

I’m just going to pretend I missed the words ‘top three,’ because I don’t think I could narrow my favorites down to that number without pulling out most of my hair.


What are my favorite books, you ask?  Well, I love everything by Kurt Vonnegut (The Sirens of Titan is my personal favorite), Margaret Atwood (especially The Robber Bride), Ray Bradbury (Dandelion Wine!), J.D. Salinger (Franny and Zooey gets me every time), T.S. Eliot, Sylvia Plath, Roald Dahl, Annie Dillard, and the Bronte sisters.  I also love To Kill a Mockingbird and Calvin and Hobbes.  And I think Hamlet is probably the single best thing that has ever been written.

I have a hard time calculating this, because I do both, sporadically, all day long.  When I’m drafting something new, I try to write at least a thousand words a day.  Sometimes this takes just an hour or two; sometimes it takes all day, with lots of time wasted between sentences.  (I’m embarrassingly good at Plants vs. Zombies.)

As for reading: I always read multiple books at once, and I’ve got a different in-progress novel in almost every room in the house.  I seem to finish two or three per week.

It was the shyest, simplest, most old-fashioned path.  I’m not the type of writer who could (or would) pitch a concept in an elevator at a busy book convention.  Just imagining it terrifies me.

I spent years developing my writing, experimenting with styles and forms, getting poetry and short stories published here and there.  I finished the book that would eventually become The Shadows, which took several additional years.  I did my research.  I found out what agencies were looking at books like mine.  I wrote a query letter, revised it about thirty times, and sent it off to agents.  Then I sat back and waited, telling myself that it was never going to happen so I might as well not get my hopes up.

But I got lucky. Chris Richman, who was just starting his career as a junior agent at a now-disbanded agency, pulled my letter and my sample pages out of the slush pile.  Within just a few months, Chris had multiple publishers interested in my book, and we got to pick the one that felt like the perfect fit.

I think it’s something in between, really.  I didn’t study writing in college or earn an MFA, and while I know those programs can provide valuable things, I don’t think someone can enter such a program NOT a writer and emerge as one.

I’m primarily “self-taught,” I suppose.  But being a self-taught writer doesn’t mean that I haven’t studied intensely, and practiced, and researched, and learned.  Becoming a writer requires years of devoted reading, followed by years (and years) of writing.  The love of stories may be innate, but the skill it takes to build them comes with time, attention, and effort.

I love the times when the writing is going well, and it feels like I’m actually traveling into another world, getting to watch and listen as my characters move through their lives.  I love the moments when the right set of words comes together, and there’s a sudden spark of energy, like electricity running through a wire.  And I love picking up something I wrote a long time ago, reading it objectively, and realizing that I actually like it.
My least favorite things are the opposite of these:  When I can’t get into the magic world, when the right words refuse to come together, and when I realize that something I wrote and thought was promising is actually an utter mess.

Truman Capote.  His gossip is art.

Posted by middle grade ninja at 8:51 AM