Diane Magras and I discuss fantasy worldbuilding, monsters, and horror in her newest middle grade novel, SECRET OF THE SHADOW BEASTS. We talk about author day jobs, why it’s important to get in the habit of finishing your story (even if it’s bad), her writing process, the power of constructive criticism and how she learned to open herself to it, Stephen King, Kurt Vonnegut, what it’s like to be an author married to a book critic, and so much more. 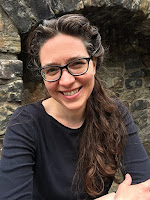 Diane Magras, award-winning author of the New York Times Editors’ Choice The Mad Wolf’s Daughter, its companion novel, The Hunt for the Mad Wolf’s Daughter, and the upcoming Secret of the Shadow Beasts, grew up on Mount Desert Island in Maine, surrounded by woods, cliffs, and the sea. An unabashed fan of libraries (where she wrote her first novel as a teenager), history (especially from cultures or people who’ve rarely had their story told), and the perfect cup of tea, Diane lives in Maine with her husband and son and uses the pronouns she/her. 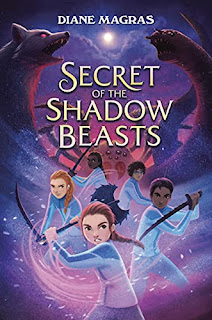 For fans of Dragon Pearl and the Lockwood & Co. series comes a swift-moving contemporary fantasy about a young girl tasked with destroying deadly shadow creatures.In Brannland, terrifying beasts called Umbrae roam freely once the sun sets, so venomous that a single bite will kill a full-grown adult—and lately, with each day that passes, their population seems to double. The only people who can destroy them are immune children like Nora, who are recruited at the age of seven to leave their families behind and begin training at a retrofitted castle called Noye’s Hill. But despite her immunity, Nora’s father refused to let her go. Now, years after his death by Umbra attack, Nora is twelve, and sees her mother almost killed by the monsters too. That’s when Nora decides it’s time for her to join the battle. Once she arrives at Noye’s Hill, though, she and her new friends are left with more questions than answers: Where are the Umbrae coming from? Could the government be covering up the true reason their population has whirled out of control? And was Nora’s father, the peaceful, big-hearted man who refused to let Nora fight, in on the treacherous secret?
DianeMagras.com
Posted by middle grade ninja at 9:26 AM