Greg Van Eekhout and I discuss climate change, Norse mythology, and the awesomeness of dogs, all of which are on display in his newest novel, FENRIS AND MOTT. We talk about the psychology of writers, how he found the confidence to know he’ll adapt as a writer, helpful activism in the face of book bans (beyond Twitter), Whovian philosophy, writing from outlines designed for contracts, Big Foot, the Loch Ness Monster, murder hornets, and more. 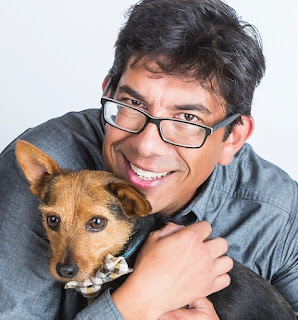 Greg van Eekhout was born and raised in Los Angeles, California, in neighborhoods with hippies, criminals, working people, and movie studios. His parents were Dutch-Indonesian. Like many writers (and many people who aren’t writers, for that matter), Greg has done a number of things to put food on the table and keep a roof over his head. He has worked as an ice cream scooper (or dipper, as people who sell ice cream are sometimes called), a political fundraiser (or telemarketer), a comic book store clerk, a bookseller, a bookstore assistant manager, an educational multimedia developer, and a college teacher (of English and of multimedia development). Among other things. His next book, Fenris and Mott, comes out August, 2022. Greg has lived his entire life in the Western half of the United States. He prefers beaches to deserts. He currently lives in San Diego. 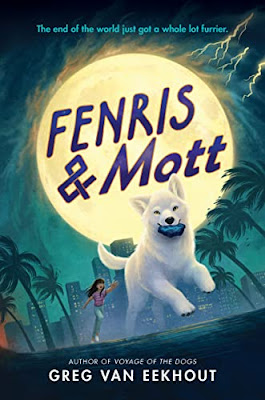 A girl and her puppy face down the end of the world—which the puppy’s partly responsible for—in this middle grade story from acclaimed author Greg van Eekhout, perfect for fans of Gordon Korman and J.C. Cervantes.

When Mott finds a puppy abandoned in a recycling bin, she’s ready to do everything she can to protect him. What she doesn’t realize, however, is that this is the legendary wolf Fenris, who’s prophesied to bring about the end of the world by eating the moon.

Now Mott has found herself in charge of making sure the hungry pup—who’s busy munching on lampposts, cars, and water towers—doesn’t see all of California as an appetizer, while also hiding him from the Norse gods who are hot on his trail, determined to see the prophecy come true.

Mott vows to protect Fenris, rescue him from his destiny, and prevent the world from ending. But will she be able to keep her promise? Or has she bitten off more than she can chew?

Posted by middle grade ninja at 10:47 AM