Padma Venkatraman and I discuss her new middle grade novel, THE BRIDGE HOME. We discuss everything from her childhood in India to her becoming an oceanographer and now an award-winning author. We also discuss religion, spirituality, writing about them for the middle grade market, and, of course, flying saucers. This episode is filled from end to end with fascinating insights about writing and storytelling, as well advice for living. 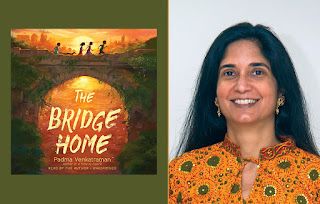 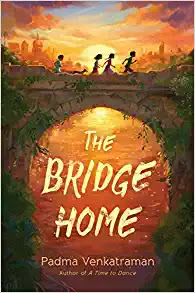 When Viji and her sister, Rukku, whose developmental disability makes her overly trusting and vulnerable to the perils of the world, run away to live on their own, the situation could not be more grim. Life on the streets of the teeming city of Chennai is harsh for girls considered outcasts, but the sisters manage to find shelter on an abandoned bridge. There they befriend Muthi and Arul, two boys in a similar predicament, and the four children bond together and form a family of sorts. Viji starts working with the boys scavenging in trash heaps while Rukku makes bead necklaces, and they buy food with what little money they earn. They are often hungry and scared but they have each other--and Kutti, the best dog ever. When the kids are forced from their safe haven on the bridge, they take shelter in a graveyard. But it is now the rainy season and they are plagued by mosquitos, and Rukku and Muthu fall ill. As their symptoms worsen, Viji and Arul must decide whether to risk going for help--when most adults in their lives have proven themselves untrustworthy--or to continue holding on to their fragile, hard-fought freedom.