Luke X. Cunningham is an Emmy-nominated writer from Philadelphia. Previously, he spent three years as a writer for The Tonight Show Starring Jimmy Fallon. He developed a passion for the Renaissance while earning a history degree from Brown University. He currently lives in Los Angeles, CA, with his wife and their son, Finn. LEO: Inventor Extraordinaire is his first novel. 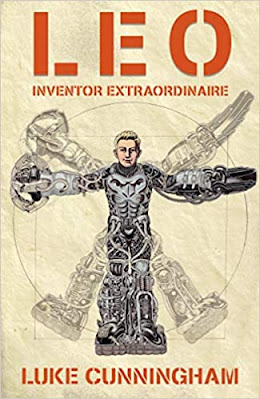 A school for incredibly gifted orphans. A genius kid inventor. A subterranean maze. And a mechanical monkey. What could go wrong?
A “lifer” at the secluded Academy of Florence, Leo has never met his parents ... or anyone in his family for that matter. He spends most of his time tinkering with inventions that never work (or work disastrously) and making trouble with his infinitely more charming friend and fellow lifer, Savvy. After Leo’s latest experiment goes catastrophically wrong, he discovers a series of secret passages beneath the school that can only be unlocked by the sharpest of wits and a little help from Leo’s school lessons.
Leo hopes the network of tunnels will lead him to the academy’s infamous archives where he hopes to discover the identities of his parents and the reason he’s an orphan in the first place. Instead, he finds that his past and possibly even his future is somehow linked to the innovative Wynn Toys company, whose genius president died mysteriously years before.
Leo must use his skills as an inventor to revive the toy company, oust its dastardly leader, and discover the fate of his real family.
More on the Book: HarperCollinsChristian.com
Instagram: @Leo.Inventor.Extraordinaire
Posted by middle grade ninja at 7:12 AM