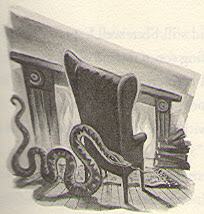 First Paragraph: The villagers of Little Hangleton still called it “the Riddle House,” even though it had been many years since the Riddle family had lived there. It stood on a hill overlooking the village, some of its windows boarded, tiles missing from its roof, and ivy spreading unchecked over its face. Once a fine-looking manor, and easily the largest and grandest building for miles around, the Riddle House was now damp, derelict, and unoccupied.

Welcome, Esteemed Reader, to the first ever edition of the Ninja Book Club! As promised, we will be discussing one chapter per week from Harry Potter and the Goblet of Fire for the next 37 weeks. If you want to play along, comment below and we'll chat it over. You don't even have to read the week's chapter if you know the story well enough:)

What I love about the first paragraph above is that it's a very specific hook for a very specific reader. If you're that one reader who doesn't know the story of Harry Potter, than Rowling will still hook you before the end of the chapter. But Rowling's intended reader will have read the previous three Harry Potter books when she comes to the first chapter of this one. She will know that Tom Riddle is the real name of Lord Voldemort, murderer of Harry's parents and scourge of the wizard world. The prospect of learning more about one of literature's best villains will sustain her through an entire chapter not set at Hogwarts or staring Harry Potter, who is not even mentioned until several pages in.

I had a literature professor who used to go on and on about how the house was usually a metaphor for the mind in fiction. There are many examples of this and it is true that setting plays a huge role in defining a character, but it is not true that every house ever described is the metaphoric mind of the character (sometimes a cigar is just a cigar).

It's a curious place for Rowling to begin a middle grade novel and it's something she never would've gotten away with in Harry Potter and the Scorer's Stone. Yes, I know the first chapter of that book was about adults, but it was about adults with magic powers and the introduction to a new world. This chapter is about an old man; an old muggle man.

Imagine, if you will, an army of eager readers lined up at the door, excited to be reunited with Ron and Hermione and all the beloved characters of the series and Rowling says, "Ahh, ahh, ahh, not so fast. First I'm going to tell you about an old man and his struggles. You younger readers, the most impatient readers of all, I'm going to have you sit and wait while I tell you about an old man for a whole chapter before we get to Harry." I am in awe of Rowling's confidence.

To be fair, though the Potter books are a culmination of many genres, they are mysteries above all else. And this first chapter opens with a mystery and ends as a horror story. Just like the best thriller writers, Rowling draws us in with descriptions of violence and the promise of more violence. I like to think of this next passage as CSI: Hogwarts:

A team of doctors had examined the bodies and had concluded that none of the Riddles had been poisoned, stabbed, shot, strangled, suffocated, or (as far as they could tell) harmed at all. In fact (the report continued, in a tone of unmistakable bewilderment), the Riddles all appeared to be in perfect health — apart from the fact that they were all dead. The doctors did note (as though determined to find something wrong with the bodies) that each of the Riddles had a look of terror upon his or her face — but as the frustrated police said, whoever heard of three people being frightened to death?

What a lovely story for children this is:) The whole point in starting the novel as Rowling does is largely for exposition. Our old man muggle, Frank, wonders out to the Riddle house and overhears Voldemort chatting with wormtail:

“It could be done without Harry Potter, my Lord.”
Another pause, more protracted, and then —
“Without Harry Potter?” breathed the second voice softly. “I see . . .” “My Lord, I do not say this out of concern for the boy!” said Wormtail, his voice rising squeakily. “The boy is nothing to me, nothing at all! It is merely that if we were to use another witch or wizard — any wizard — the thing could be done so much more quickly! If you allowed me to leave you for a short while — you know that I can disguise myself most effectively — I could be back here in as little as two days with a suitable person —”
“I could use another wizard,” said the cold voice softly, “that is true. . . .”
“My Lord, it makes sense,” said Wormtail, sounding thoroughly relieved now. “Laying hands on Harry Potter would be so difficult, he is so well protected —”

Frank overhears all of this important exposition (and much more) without ever getting a good look at Voldemort and then the dark lord kills him at the end of the chapter before he can describe Voldemort's appearance for the reader. This is the equivalent of keeping the shark below the water at the start of Jaws and the effect is the same: the reader knows a horrible monster is loose and our hero will have to deal with him. This is a horror story set up and it works quite well.

The reader thusly hooked, we join Harry and catch up with our heroes. But that's next week's chapter:)

For this week, I have only two more thoughts. Number one: you should never write "he hissed" in place of "he said" as it is physically impossible for humans to hiss and speak at the same time. Even the weak "he said with a hiss" is better, and "he said while doing an action" is best. The one exception to this writer's rule is if your character speaks parseltongue:

Then the second man spoke once more, in a whisper that was almost a hiss.


My second thought is really more of a question: Why did Rowling introduce Frank? She spends several pages telling us how he was falsely accused of murdering the Riddles to build our sympathy and just when we know something about him, he dies. Surely, it would be more expedient for her to start her very long book from Wormtail's perspective and shorten this chapter. Why is Frank included at all?

Sound off in the comments below for a book club discussion. Otherwise, meet me here next Wednesday when we'll chat about chapter two.

Last Paragraph(s): And then the chair was facing Frank, and he saw what was sitting in it. His walking stick fell to the floor with a clatter. He opened his mouth and let out a scream. He was screaming so loudly that he never heard the words the thing in the chair spoke as it raised a wand. There was a flash of green light, a rushing sound, and Frank Bryce crumpled. He was dead before he hit the floor.
Two hundred miles away, the boy called Harry Potter woke with a start.

Posted by middle grade ninja at 8:42 AM