An Afterword for ALL TOGETHER NOW: A ZOMBIE STORY Part One: How and Why I Wrote It 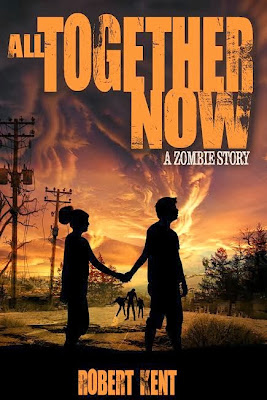 WARNING: This Young ADULT novel is mean and nasty and intended for a mature audience. It is absolutely not appropriate for younger readers. It is a gruesome, repugnant tale sure to warp young minds. Seriously.

The following is a three-part Afterword for All Together Now: A Zombie Story (you could probably read the actual book in less time). I'm going to keep it mostly spoiler-free, but I am going to discuss writing, theme, and some of the choices I made. If you haven't read the book, this might be more interesting after you have. You can get the first 14 chapters free here.

This isn't an explanation for or defense of my novel. I believe a story either stands on its own or it doesn't, and no amount of supplemental material changes that. But I do run this blog about writing in which I discuss technique and I'm never going to have as firm a grip on why something was done in a story as when I'm discussing my own work.

That being said, my interpretation is probably not the most valid or reliable. Whatever you think the book is about is absolutely right. This story was mine for a time and I loved it dearly, but now it's out in the world and it belongs to you, Esteemed Reader.

Let's start at the beginning.

Before I created this blog about children's literature, I wanted to be Stephen King (still do). For the four years of this blog I've read and wrote mostly middle grade books, trying to bury my dark side. But all the while it was festering and growing ravenous until I apparently could not contain it. How else am I to explain the existence of this mean-spirited book on a shelf of my otherwise good-natured stories about adventures with robots and talking animals (all soon to be available)?

If you read this blog regularly, Esteemed Reader, you know I love zombies. Other than Batman, a zombie apocalypse is my favorite thing to read about. For years, I toyed with the idea of writing a middle grade zombie book, which is why soda is the cause of my zombie apocalypse (my very own!).

Ordinarily, I wouldn't waste time with an explanation for the zombie apocalypse unless the zombies were realistic--infected humans rather than walking corpses. As my zombies are supernatural, there isn't a truly convincing explanation I can offer for them, so why bother?

Because the crux of my tale revolves around a possible cure for zombie-ism. In order for my heroes to speculate there might be a cure for zombies, they have to know the cause. If zombies simply rise up from the grave and attack, no one would suspect a cure-able disorder.

I figure soda is poison marketed to children by insidious profiteers who are traitors among us (not to take an extreme position). Children and especially teenagers drink soda, they become obese, jittery, overly-emotional, violent, and so on. For me, it's a short trip from that to child zombie. As I'm still paying for dental bills resulting from the soda that was marketed to me and made available at my school, I have an ax to grind with big soda.

I didn't take my story idea serious until I came up with the perfect zombies-don't-suck-you-suck ending. This is my brother's shorthand for the big scene at the end of most zombie stories where the storyteller creates a metaphor for why human society is actually worse than zombies--see Night of the Living Dead.

For example, at the end of 28 Days Later, when Jim has killed a bunch of people for the "right reasons" and he's coated in blood and Selena has a gun pointed at him, uncertain whether Jim is a violent infected or still human because she can't see a difference, one can almost hear director Danny Boyle shouting, "Human beings are violent jerks, infected or not. Zombies don't suck. You suck!"

Having my ending in mind dictated my theme and style. I don't care that a protagonist writing a journal of the zombie apocalypse is more than a bit played out, so are zombies, and readers haven't yet seen my protagonist write a journal of my zombie apocalypse. A first-person account keeps an epic tale contained and frees me from the obligation to relay how the apocalypse is effecting all the people who aren't this one kid.

So I decided to tell the story of 11-year-old Ricky traveling amongst the dead in search of a cure for his six-year-old zombie brother Chuck. It would be a somewhat grim story, I thought, but still appropriate for young readers as my zombies would be only playfully scary.

But my dark side saw his chance to come out and play. I was writing horror, after all. Three chapters in Mr. Hyde shoved Dr. Jekyll aside and wrote this:

I heard muffled thumping. There were two corpses pounding on the windshield from inside the truck.
"They're out of food," Levi said.
When I looked where he was pointing I felt faint and my vision clouded with black spots. If this had happened a week ago, I would've thrown up. But I've seen a lot since then.
At first I could see only the zombies lying on the roof of the truck's cab, Mommy and Daddy. Both of them had the dark rimmed, all-white eyes of the dead, sunken because the pale grey skin surrounding them had gone lax and hung off their skulls like dough.
Mommy was wearing a blue summer dress, stained maroon all down the front. Daddy had broken his neck and his head lolled on his shoulder. An unnatural bulge protruded beneath his jaw and stretched the skin there to near bursting.
Then I saw what Levi meant by "food."
Hanging upside down behind Mommy and Daddy was a car seat. It was still strapped in, despite the seat belt straps on either side having been gnawed through.
The soft grey lining of the car seat was stained red and black and covered in flecks of skin and hair.

I remember staring at the page, stunned. Where were my kid-friendly middle-grade zombies? I highlighted the passage and my finger hovered over 'delete.' Then I remembered reading Beautiful by Amy Reed and The Duff by Kody Keplinger. Those wild ladies got away with everything in young adult and I wasn't even writing about sex (for shame!). I was writing about graphic violence (understandable and perfectly acceptable), so my book would totally pass if I made it about teenagers. Ricky became 15-years-old instead of 11, problem solved.

When Levi ran out of names to call the dead girl, he stomped her head.
His aim was off. Instead of crushing her skull, he broke her jaw.
Her lips slid crooked. Still she made no noise and when she flopped over I saw why: her throat had been torn out and probably her voice box as well.
Levi raised his leg and her one hand seized his ankle.
Her fingers stayed clasped as Levi stomped her twice more, but released on the third stomp when her face caved in like a rotten jack-o'-lantern.
Her arm dropped and lay still.
Levi spit on her and put his cigarette out in the mashed all-white goo of her eye socket.
When his eyes met mine, he looked embarrassed as though I'd caught him behind the counter with a dirty magazine. "I hate those things."

After that, I abandoned all pretense of playing nice, as evidenced by a later scene at a daycare center. I decided to just go for it and when I went too far (and I did) my writer's group, my agent, and my wife would remind me there was a good chance my mother might read this book.

In this way, writing All Together Now: A Zombie Story freed me in a way nothing else could. What had started as a just-for-fun-between-projects exercise became an obsession. For years I'd been writing for the market, thinking of what editors and publishers might respond to, but now I was writing a story for no other reason than I wanted it to exist.

I focused on character and action and for a time, that was all. In order for readers to care about Ricky and Chuck being chased by zombies, they have to care about Ricky and Chuck. I spent a lot of time thinking of who they were and decided to make them products of a broken home so they'd have their own issues and conflicts that could fill a novel even if the zombie apocalypse didn't break out.

A trend I've noticed since writing this blog is that the majority of authors of MG and YA are female. I don't think it's coincidence that in most of the divorce stories I've read, the cause of the divorce is more frequently the father. Sometimes the child protagonist comes to realize their mother was right all along and her ex-husband really is a jerk. As wonderful as my own mother is, I promised myself if I ever wrote about a broken family, I'd strike a blow for the men and tip the scales back a bit. So I let Mom have it:)

As I was putting all that together, I had a sudden revelation about what had happened to Chuck to make him a zombie. The scene of Chuck's death and rebirth came to me whole and intact. In a flash, I understood what my novel was about and why I had to write it.

Posted by middle grade ninja at 6:41 AM

Email ThisBlogThis!Share to TwitterShare to FacebookShare to Pinterest
Labels: Afterword, All Together Now: A Zombie Story, Robert Kent, Thoughts on Writing, Zombies