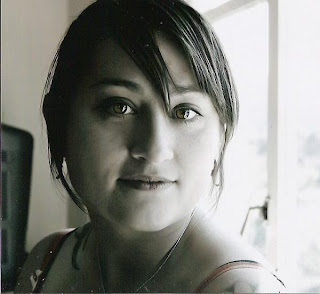 Amy Reed was born and raised in and around Seattle, where she attended a total of eight schools by the time she was eighteen. Constant moving taught her to be restless, and being an only child made her imagination do funny things. After a brief stint at Reed College (no relation), she moved to San Francisco and spent the next several years serving coffee and getting into trouble. She eventually graduated from film school, promptly decided she wanted nothing to do with filmmaking, returned to her original and impractical love of writing, and earned her MFA from New College of California.

Her short work has been published in journals such as Kitchen Sink, Contrary, and Fiction. Her first Young Adult novel Beautiful

was released October 6, 2009 (Simon Pulse/Simon and Schuster). Click here to read my review.

Amy currently lives in Oakland, California with her husband, two cats, and one dog, and has accepted that northern California has replaced the Pacific Northwest as her home. She is no longer restless.

That's an impossible question to answer. If you asked me tomorrow, I'd probably have a completely different answer. Right now, I'd have to say "The Lovely Bones," by Alice Sebold; "One Flew Over the Cuckoo's Nest," by Ken Kesey; and "The Road," by Cormac McCarthy. If we're talking about books for kids, I'd say "Wintergirls," by Laurie Halse Anderson; "Luna," by Julie Anne Peters; and "King Dork," by Frank Portman.

I feel like I'm supposed to tell you I read and write all day every day, but the truth is that I also have a full-time job and a very full life. Friday and Saturdays are my designated writing days, but I usually can't write more that four or five hours at a time. Even though I'm technically not writing all the time, I'm thinking about my characters and jotting down notes all week. My commute to work is about an hour each way, so that's where I do most of my reading, plus a few minutes before bed and here and there on the weekends if I have any spare time.

I wrote about half of Beautiful

while in my MFA program for writing, and finished it about a year after graduating. At the time, I didn't really know the YA genre existed, so I guess I was intending it for an adult audience, although I always hoped it would find its way into the hands of teens. I got about half a dozen rejection letters from agents before one kindly informed me that Beautiful was YA and I should be looking for an agent who specializes in YA. I queried two YA agents, got interest from both, went with the fabulous Amy Tipton (who just so happened to graduate from my same MFA program a year before I started). Within a month, she got offers from two publishers. I went with Simon Pulse because I really liked their edgy list, and the fact that they wanted to publish Beautiful in hardcover. They really believed in the book, and in me, and I felt like they really understood what I wanted to say.

Both, absolutely. I think a person is born with an innate sensitivity and compulsion to figure people out. It constantly suprises me that not everybody is obsessed with psychology and people's motivations. Some people are just driven to tell stories, to present information and narrative in a voice of their creation. But I'm pretty sure it's impossible for a writer to be any good (and I welcome people to prove me wrong) unless they read and learn from the great lineage of storytellers. Someone can have the greatest story, but if they don't know how to craft it, they'll never be able to communicate what they want to. So much of what I do has been inspired by what others have done. We're all a bunch of copycats really, but the best writers build on inspiration and create something new.

I always wrote, but most of it was horrible. The poetry I wrote as a teenager is just ridiculous. I don't think I really became a decent writer until i went to film school and learned to think about storytelling in terms of scenes and what can be shown rather than told. Before then, I was always writing from inside my head and that's a pretty boring and self-indulgent place to be. In grad school, I learned craft and read great and diverse writers. Having my work critiqued by the professors and other students really helped me find my voice, build upon my strengths and really recognize my weaknessess.

The best thing is when I'm totally in the moment, when I'm experiencing what I'm writing as if it's real, something completely new that no one's ever experienced before. It's when the walls of the real and imaginary break down and I can completely lose myself in the world I've created. The worst thing is when I desperately want that to happen but it just won't, no matter how hard I try. I guess some people call that writer's block.

To me, the most important thing for a writer, for any artist, is to tell the truth. Don't try to write like someone else because that's what's popular. There are stories inside everybody that need to be told, authentic stories with unique voices and points of view. Find your truth, your vision. Ask yourself what sets you apart from everybody else. What can you say that's never been said before in your particular way?

I'd be so terrified of all of them, I probably wouldn't show up for the lunch date. Margaret Atwood? No, I'd probably have a panic attack. Laurie Halse Anderson? I probably wouldn't be able to speak. Maybe Ellen Hopkins. I've heard she's really nice and approachable. I did have drinks with Frank Portman one time but I was a total dork and he probably hates me now.

Posted by middle grade ninja at 6:01 AM