Stefani Deoul and I enjoy a far-ranging conversation about the creative process across multiple mediums. We talk about her career as a film and television producer as well as a young adult novelist. You can be sure I ask her about Stephen King television adaptations, such as her productions of HAVEN and THE DEAD ZONE. We also talk about SAY HER NAME, the third book in Sid Rubin Silicon Alley Adventure series, which leads to a discussion of research tips for authors, writing the language of teenage characters, giving and receiving revision notes, and so much more. 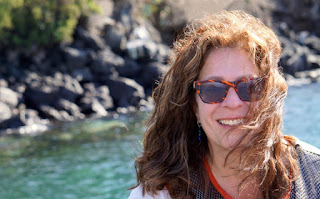 Stefani Deoul is the author of the award-winning novels, ON A LARP, and ZERO SUM GAME, books one and two of her YA Mystery series, the Sid Rubin Silicon Alley Adventures. Book three, SAY HER NAME, releases December 10th. Other works include her first novel, the women's literary fiction, THE CAROUSEL, as well as numerous publications, including pieces for Curve magazine, Outdoor Delaware and Letters from CAMP Rehoboth. In addition, Stefani has penned short stories and several film/television treatments.

As a television producer her resume includes series such as HAVEN for the SyFy Network, THE DEAD ZONE and BRAVE NEW GIRL, DRESDEN FILES and MISSING.

Along with producing five seasons of Haven, based on the Stephen King story THE COLORADO KID, Stefani finally succumbed to the allure of acting, “starring” as the off camera, and uncredited, radio dispatcher, Laverne. 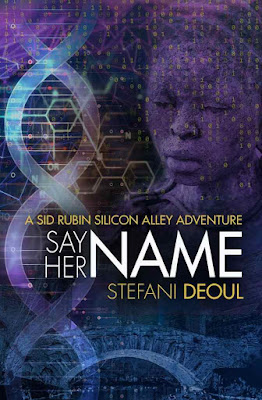 High-flying lesbionic brainiac Sid Rubin is caught up in the glow of new love—and the snowball fight of the century. Distraction in action, Sid forgets to duck and takes a full facial hit, launching her backward into Imani, who in turn slides down a hill, through a thicket, and amazingly, lands safely. Or so she thinks. Until she hears an ice crack and sees a fingertip rise through the small fissure.

Jimmy, Sid, Ari, and Vikram slip and slide their way to the rescue, somehow knowing that a chain of events has just been set in motion.

The finger becomes a hand, and then a body. It’s a young girl. And she’s not alone. There are seven more skeletons―unidentified and unclaimed. When Imani utters the words, “I want someone to say her name,” it’s time for the posse to round up and ride again―chasing a mystery across time, and states, and even continents. A genetic genealogy hunt that's right up Sid’s Silicon Alley.

But there’s a glitch in the system, because Sid's new girlfriend, Ava, has other plans. And Sid learns the hard way that before she can untangle someone else's family tree, she will have to find her own roots.


StefaniDeoul.com
Posted by middle grade ninja at 8:53 AM